IRSYAD AL-HADITH SERIES 374: “MOUTH IS THE CAUSE PEOPLE FALL INTO HELLFIRE” 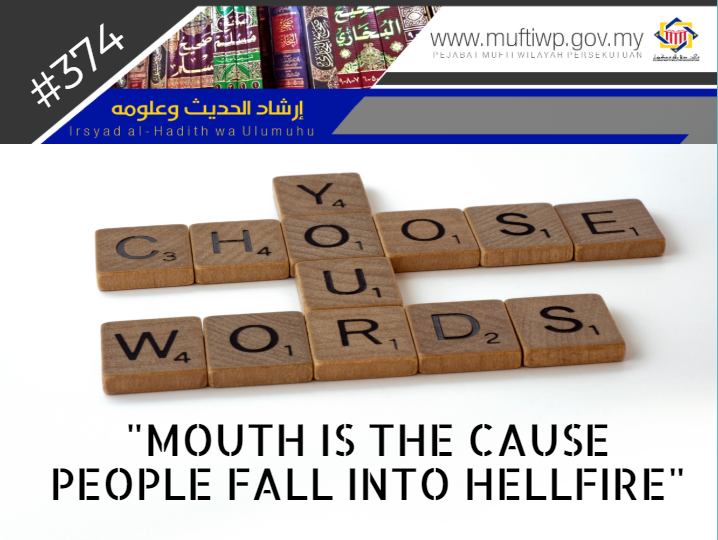 Is it true that there is a hadith that states that most hellfire dwellers are from among those who do not take care of their mouth or tongue?

We will start this article emphasizing the fact that Islam is a religion where good conduct and character is of utmost importance. The reason is, the Prophet PBUH himself is sent to all humankind to perfect good character. This is stated in a sound hadith from Abu Hurairah RA, where the Prophet PBUH said:

“I was sent not for anything but to perfect good character.”

In answering the above question, there is a hadith details that most dwellers of hellfire are among those who do not take care of their mouth or tongue when they are alive. One of the hadiths that describes this is:

"Taqwa of Allah, and good character." And he was asked about that for which people are admitted into the Fire the most, and he said: " The mouth and the private parts."

Syeikh Abdullah al-Talidi states in his book when he was commenting on the above hadith regarding the matters that could lead someone to paradise or hellfire. In the above hadith, it is said that mouth as the cause means those who do not take care of their mouth from sins of the mouth such as words of disbelief, insult, qazaf, mocks, lies, backbiting, inciting conflict, false witness and others. While for private parts are for those who do not protect their private parts from adultery, sodomy, do not cover their aurah in front of other than his or her mahram and others. (See Jawahir al-Bihar, 1/170)

Furthermore, Syeikh al-Mubarakfuri states that mouth in the above hadith also meant that protecting his tongue for when someone protects his tongue it will save him from all sorts of aspects in religion and eating the permissible for these are the important characteristics of taqwa. (See Tuhfah al-Ahwazi, 6/120)

As a conclusion, the above hadith is a sound hadith that is proven transmitted from the Prophet PBUH. Lastly, let us all try to be the best Muslim with the best conduct and character by emulating the Prophet PBUH as our example. Amin.