IRSYAD AL-HADITH SERIES 379: PRAYER IS THE PILLAR OF RELIGION 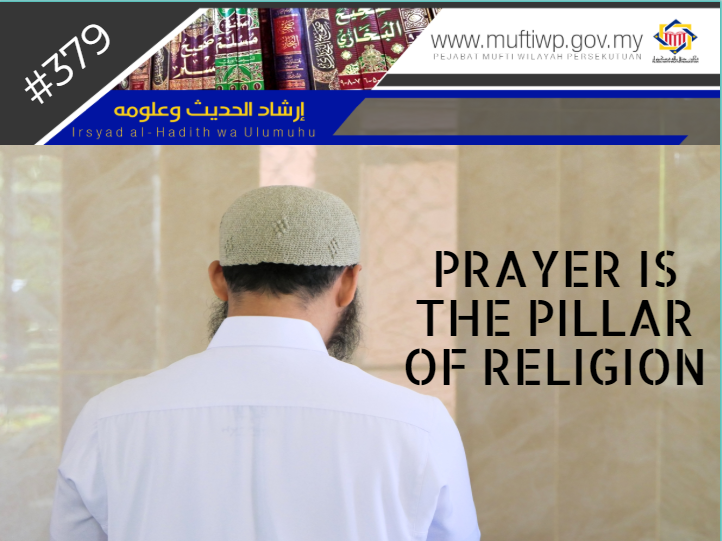 “Prayer is the pillar of religion.”

According to the above question, the stated hadith is a popular hadith in our society where most of us know and even have memorized it, for the hadith is frequently mentioned in sermons and lectures related to prayer.

Thus, in this series of Irsyad al-Hadith, we try to explain and discuss the authenticity of the hadith. First, we would like to start by stating the source of the hadith:

“Praying on time, whoever leaves the prayer then there is no religion for him and the prayer is the pillar of religion.”

Here, we include the discussion of the scholars regarding the above hadith:

Among the conclusions of scholars regarding the status of the hadith:

After analysing and reviewing the opinions of scholars regarding the above hadith, we are inclined in stating that the sanad of the hadith is dhaif because Imam al-Hakim said that ‘Ikrimah did not narrate the hadith from ‘Umar RA. However, the hadith is supported by another authentic hadith:

“The head of the matter is Islam, its pillar is the prayer and its peak is jihad.”

As a conclusion, the hadith is weak in term of its narration. However, the meaning of the hadith is authentic according to the hadith narrated by al-Tirmizi and other authentic hadiths which states the benefits of prayer. Lastly, may Allah SWT make us of those who preserve their prayers and those whose deeds are accepted. Amin.