IRSYAD AL-HADITH SERIES 384: THE DIFFERENCE BETWEEN MUKHADRAM AND TABI’IN 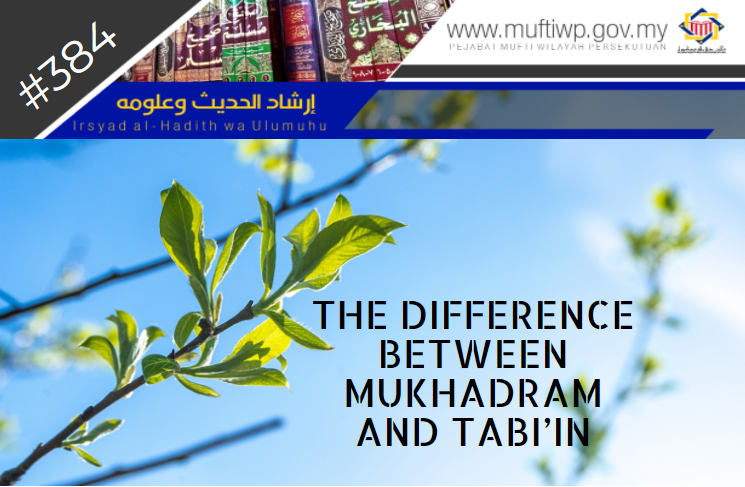 Such terminologies are often found in books that gathered matters related to the narrators of the hadiths of the prophet PBUH. Thus, if we learn the meaning of these terminologies, then it would somehow help us to know more about the background of a narrator.

In answering the above question, al-Mukhadram means a narrator between two tabaqat which is between the tabaqat of the Companions and the tabi’in. Thus, these narrators are named as al-Mukhadram, those who lived during the Jahili era, but had never met the Prophet PBUH. The sahih opinion state that they are grouped in a huge tabaqat or group of tabi’in, whether one of them are known to be a Muslim during the time of the Prophet PBUH such as al-Najasyi or otherwise. This is the opinion of al-Hafiz Ibn Hajar al-Asqalani in his book al-Nuzhah. (See Nuzhah al-Nazhor, 118)

According to Imam al-‘Iraqi, what is meant by they managed to live during the Jahili era is that they lived with their people or others in disbelief before the opening of Mecca. Imam Muslim stated that one of the al-Mukhadram among narrators is Yusair bin ‘Amr. The reason is, he was born after hijrah and the Prophet PBUH passed away when he has not even reached ten years old, but he managed to live during the Jahili era with his people.

After understanding the meaning of al-mukhadram, let’s analyze the second term which is tabi’in. A tabi’in is a person who met one of the companions of the Prophet PBUH, believes in the Prophet PBUH and died as a Muslim. Furthermore, tabi’in are also divided into several tabaqat or levels. Some of them are considered as thiqah and others. (See Lughah al-Muhaddith, 287)

Hopefully, this brief explanation would benefit us all in understanding the science of hadith. Lastly, may Allah SWT give us understanding in religion and subsequently we are able to practice it. Amin.