IRSYAD AL-HADITH SERIES #385: THE BENEFIT OF ISTIGHFAR ON FRIDAY MORNING 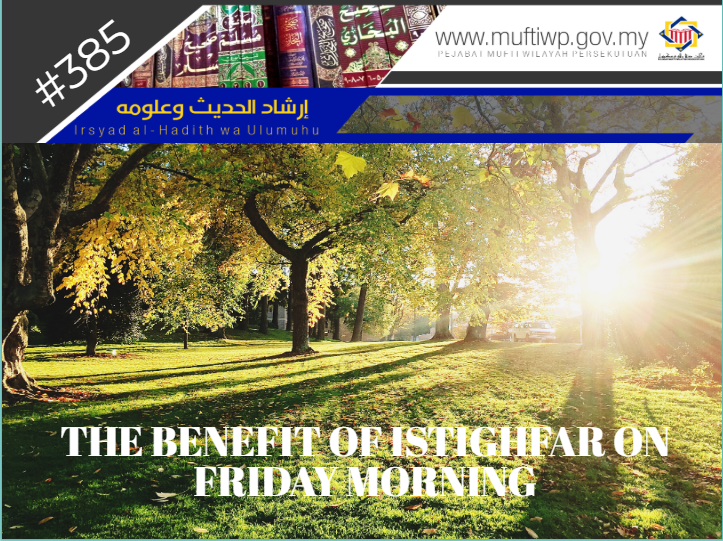 Is there a hadith stating the benefits of istighfar on Friday?

Istighfar is essential in our daily lives, where we repent to Allah SWT for all the sins and mistakes that we have committed. The reason is, our Prophet PBUH himself, who Allah SWT has granted forgiven for all his past and future mistakes never leave istighfar in his lifetime. In a hadith, it is stated that the Prophet PBUH repent through istighfar for more than 70 times a day, as narrated in Sahih Imam al-Bukhari:

“By Allah! I ask for forgiveness from Allah and turn to Him in repentance more than seventy times a day.”

Coming back to the question asked, there is a hadith that mentioned the benefit of istighfar on Fridays, the hadith is as the following:

“Whoever does istighfar on Friday morning before performing the morning prayer. And said “I ask forgiveness to Allah, there is no God except Him, The All Living, The Eternal Authority and I repent to Him, three times. Then Allah Taala forgives his sins, even if the sins are as many as the foam of the ocean.”

Among the scholars who study this hadith is Imam al-Hafiz Ibn Hajar. He determined the hadith as gharib (scarce/strange; only a single narrator is found relating it at some stage of isnad)) and its sanad (chain of narrators) as too weak (dhaif). While, Imam al-Nawawi include this hadith in his book al-Azkar with sighah tamridh, which indicates that the status of the hadith as dhaif (weak). Syeikh Syu’aib al-Arna’outh also states that the sanad for this hadith is weak. Although the status of the hadith is dhaif, there are other hadiths that generally states the benefits of istighfar all the time in every situation. As for the meaning of the foam of the sea, it is a depiction of the uncountable minor sins one has committed transgressing the rights of Allah SWT. (See al-Futuhat al-Rabbaniyyah, 143/2)

Imam al-Nawawi states that it is sunnah for us to increase our remembrance of Allah and praise and salutations for our Prophet PBUH on Friday compared to other days. Furthermore, it is also sunnah to increase our supplications on this day beginning from dawn until the sun set. (See al-Azkar, 85)

Moreover, the act of istighfar has many benefits, as narrated by Ibn Abbas RA, where the Prophet PBUH said:

“If anyone continually asks pardon, Allah will appoint for him a way out of every distress, and a relief from every anxiety, and will provide for him from where he did not reckon.”

Sunan Abu Daud (1518) [According to Syeikh Syu’aib al-Arna’outh: the sanad is dahif because one of the narrators named al-Hakam bin Mus’ab is unknown as stated by Imam al-Zahabi]

As a conclusion, istighfar is crucial for there are many benefits for anyone asking forgiveness and repenting to Allah SWT. Furthermore, we as humans can never escape from making mistakes and sinning in our daily lives. Lastly, may Allah SWT make us be among His slaves who are consistent in making istighfar and be among those who earn His paradise. Amin.