IRSYAD AL-HADITH SERIES #388: THE ADVANTAGES OF LOOKING AT MASJID AL-AQSA 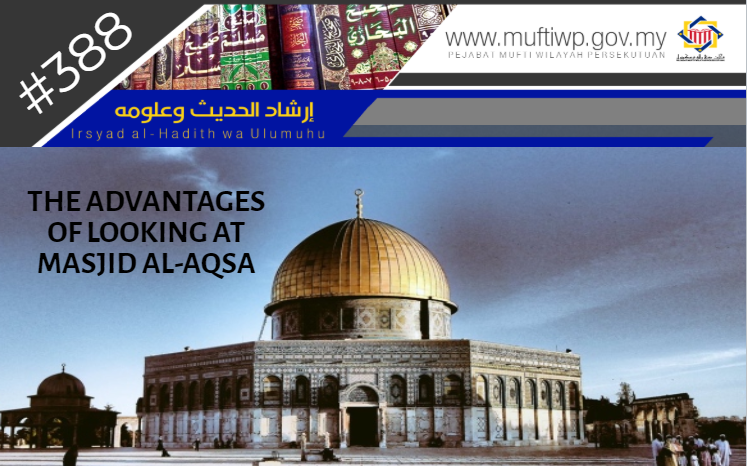 Is it true that looking at Masjid al-Aqsa is greater than the world and all its wealth?

Palestine is considered as one of the holy lands in Islam and it is also where numerous prophets are sent from. Furthermore, it is also an obligation for Muslims to love and care for Bait al-Maqdis for it is one of the holy lands mentioned in the Quran as a blessed city by Allah SWT for it is the place where the journey of the Prophet PBUH during the Isra’ and Mi’raj took place.

“Exalted is He who took His Servant by night from al-Masjid al-Haram to al-Masjid al- Aqsa, whose surroundings We have blessed, to show him of Our signs. Indeed, He is the Hearing, the Seeing.”

According to Syeikh Wahbah al-Zuhaili in his famous commentary, al-Aqsa mosque in surah al-Isra’ is Bait al-Maqdis. It is named as al-Aqsa mosque due to its long distance from al-Haram mosque. It is also the farthest mosque from Mecca which is a place where we are encouraged to visit on this earth. (See: Tafsir al-Munir, 13/15)

According to the above question, here, we include a source of which we found the hadith that states this. It is a hadith in al-Mustadrak narrated by Imam al-Hakim.

“We were discussing together while the Prophet PBUH is with us discussing on which is prioritized; the Prophet PBUH’s mosque or Bait al-Maqdis? The Prophet PBUH said: Prayer in my mosque is 4 times more prioritized compared to a prayer in Bait al-Maqdis. How blessed are those who prayed. Indeed, there will come a time where if someone owns a land as the rope for a horse (a small portion of land) that enables him to see Bait al-Maqdis, then it is better for him than the whole world and its wealth.” [Narrated by al-Hakim (8553) The hadith is sahih (authentic) and its sanad (chain of narrators) is also authentic, however, it is not narrated by al-Bukhari and Muslim][Imam al-Zahabi also said that the hadith is authentic as stated by al-Hakim]

To conclude, the above hadith proves the greater benefit and honour of al-Aqsa mosque compared to other mosques with the exception of al-Haram and al-Nabawi mosque. Hopefully, this explanation will make us more perceptive, loving and caring towards al-Aqsa mosque and what happens to it. We pray that one day al-Aqsa mosque will no longer be under the power of the Jews and we all are able to pray in it in peace. Amin.