IRSYAD AL-HADITH SERIES 407: THE ADVANTAGES OF WORSHIP ON THE NIGHT OF EID 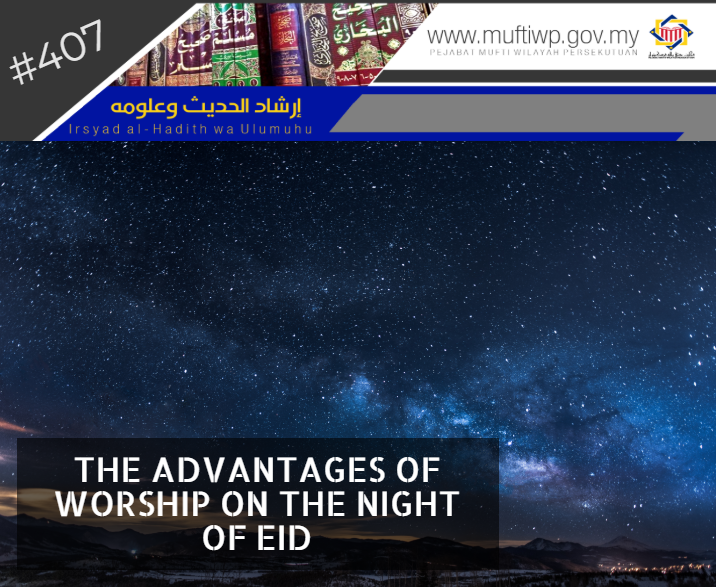 Assalamualaikum. Is it true that one’s heart will not die if he worships on the night of Eid?

The night of Eid is the time when Muslims are celebrating their success. Thus, we are commanded to showcase our happiness by increasing our obedience to Allah SWT such as increasing our worship and good deeds. Thus, the question is, is there hadiths which state the advantages for those who worship on the night of Eid?

According to the above question, we have actually answered it in Irsyad al-Hadith Series 378: “Enlivening the Night of Eid.” Nonetheless, this time we will expand our answer further. Before we answer the question, we would like to first present a hadith which narrates the advantages of worship on the night of Eid:

“Whoever spends the nights of the two ‘Eid in praying voluntary prayers, seeking reward from Allah, his heart will not die on the Day when hearts will die.”

According to Imam al-Nawawi, this hadith is narrated by Ibn Majah and Imam al-Syafie (in his Musnad). However, the hadith is dhaif (weak) from the narrations of Abi Umamah which are marfu’ and mawquf narrations where both of them are dhaif. Furthermore, these hadiths are related to permissible fadhail where is permissible to be practised (even if it is dhaif if it fulfils the conditions set by scholars). (See al-Azkar, 171). Moreover, Imam al-Iraqi said that the sanad for this hadith narrated by Ibn Majah from Abi Umamah is dhaif. (See al-Mughni ‘an Haml al-Asfar, 1/342). Syeikh Syu’aib an-Arna’outh also evaluated the sanad as dhaif because of Baqiyyah bin al-Walid. (See Sunan Ibn Majah, tahqiq: Syeikh Syu’aib al-Arna’outh, 2/658)

In Majma’ al-Zawaid, there is another narration from Ubadah bin Somit, where the Prophet PBUH said:

Imam al-Haithami evaluated the hadith as dhaif because of the narrator named Umar bin Harun al-Bakhiy who is dhaif according to most scholars. After analysing the above hadiths, we are inclined to state that these hadiths which state the advantages of worship on the night of Eid are dhaif.

In al-Majmu’ it is stated that Syafi’iyyah scholars said that it is sunnah to enliven the night of the two Eid (Eid al-Fitri and Eid al-Adha) with prayer and other forms of obedience. They supported their arguments using the hadith of Abi Umamah. All the sanad of the hadiths which narrates this matter is dhaif. (See al-Majmu’ 5/42). This is also stated by Imam al-Nawawi in his book al-Azkar. (See al-Azkar, 171)

As for the meaning of this hadith, the literal meaning of the text of the hadith states that one should enliven the whole night with worship. However, it is sufficient to perform the tahajjud prayer. Furthermore, a heart will die because of sins and transgressions and whoever met the meant day, his heart is protected (will not die) from among the people. (See Hasyiah al-Sindi, 1/542)

Imam al-Syafie RA also said that among the time where supplication will be granted are during the five nights, which are the night of Friday, Eid al-Adha, Eid al-Fitri, the beginning of Rejab and nisfu Sya’ban. (See al-Um, 1:264)

To conclude, the hadith which narrates the advantages of worship during the night of Eid is dhaif, although there are scholars who evaluated it as fake or too weak. It is sunnah to enliven the night of Eid with acts of worship such as prayer, dhikr and recitation of the Quran. Lastly, may Allah SWT make us from among His obedient slaves and those who are successful in this world and the hereafter. Amin.