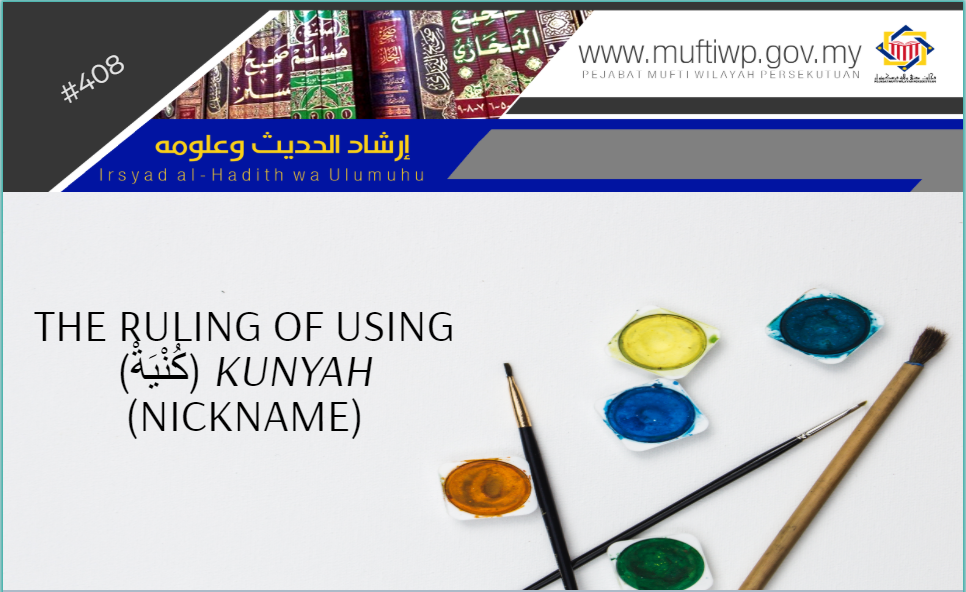 Kunyah (كُنْيَةْ) is a nickname that starts with the word “أَبُوْ (Abu or father of)” or “أُمُّ (Ummu or mother of)”. Normally, kunyah is used after one’s child, and the afdhal (preferred) one is towards the eldest child, but it is not a must. In fact, one may also use the kunyah of something or animals and etc., like Abu Hurairah (father of cats), Abu Turab and many more.

Imam al-Nawawi in his book has made a special chapter on the permissibility of it and there is no restriction for a man (or a woman) to use kunyah either after the son or daughter. This is done by most of the salaf (scholars of first three centuries), who lived in the best century among the companions and tabi’in like Uthman bin Affan. He has three nicknames which are Abu ‘Amr, Abu Abdillah and Abu Layla. The same goes to Abu al-Darda’ where he has two wives with the nickname of Ummu al-Darda’ al-Kubra and Ummu al-Darda’ al-Sughra. [Refer: al-Azkar. 297]

Among the dalils which shows that kunyah is Sunnah are according to a hadith narrated by Aisyah R.anha:

Give yourself the kunyah after Abdullah, your son - that is to say, her nephew (her sister's son) [Sunan Abi Dawud (4970)][This hadith is sahih according to Syeikh Syu’aib al-Arna’outh]

In addition, normally, kunyah or nickname is used after the eldest child. This is in accordance with The Prophet PBUH’s question towards Hani’:

Do you have any child? He replied: I have Shurayh, Muslim and Abdullah. He asked; Who is the oldest of them? I replied: Shurayh. He said: Then you are AbuShurayh. [Sunan Abi Dawud (4955)][Sanad of this hadith is good on the evaluation of Syeikh Syu’aib al-Arna’outh]

Besides, it is allowed to use kunyah even before getting married or not yet having any child. For example, the kunyah of Imam al-Nawawi is Abu Zakariyya while he is among the scholars that do not get married as mentioned in the book of al-Ulama al-‘Uzzab by Syeikh Abdul Fattah Abu Ghuddah. Among the evidence is:

"The Messenger of Allah(ﷺ) gave me the Kunya of Abu Yahya."

In al-Mawsu’ah al-Fiqhiyyah al-Kuwatiyyah, it is stated that the ruling of having kunyah is Sunnah. [Refer: al-Mawsu’ah al-Fiqhiyyah al-Kuwatiyyah, 35/169]. Hence, referring to the above discussion, kunyah is something less practised by our society nowadays, but it is a simple Sunnah that could be practiced. Among the proof that the past generation is concerned about this is, are the books written compiling the numerous kunyah, like the book of al-Kuna wa al-Asma’ by Imam Muslim bin Hajjaj and many more books written by previous scholars.

In conclusion, kunyah is one of the Sunnah of the Prophet PBUH which means names starting with the word “Abu” for men and “Ummu” for women. Normally, kunyah or nickname is after the eldest child, and if one does not have any child yet, then it is not a problem to use kunyah as mentioned before in this article. Lastly, may Allah SWT give us the strength to practice and enliven the Sunnah of the Prophet PBUH in our daily life. Ameen.