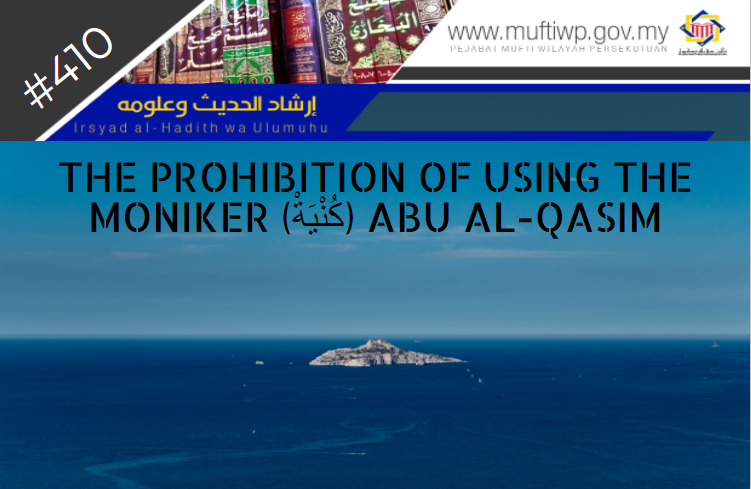 Assalamualaikum SS Mufti. What is the meaning of this hadith?

In our previous articles, we state that it is one of the sunnah of the Prophet PBUH to use a moniker (كُنْيَةْ). However, this sunnah is rarely practiced in our today’s society, unlike in the Arabic countries. Kuniya or a moniker or nickname begins with the word Abu for men and Ummu for women.

Imam Ibn Hajar al-Asqalani cited the words of Imam al-Nawawi where scholars have differing opinions in the usage of the moniker Abu al-Qasim into three opinions:

Imam al-Nawawi further said, the third opinion contradicts the literal meaning of the hadith. While, the actions of people supported the second opinion as though they based it for what happens in the hadith of Anas:

While the Prophet (ﷺ) was in the market, somebody, called, "O Abul-Qasim." The Prophet (ﷺ) turned to him. The man said, "I have called to this (i.e. another man)." The Prophet (ﷺ) said, "Name yourselves by my name but not by my Kunya (name)." (In Arabic world it is the custom to call the man as the father of his eldest son, e.g. Abul-Qasim.)

Dar al-Ifta’ Jordan issued an opinion that it is not a problem for a person to name his son Qasim or al-Qasim for there is no evidence that prohibits it. However, for our madhhab (madhhab al-Syafie) the usage of the moniker Abu al-Qasim is prohibited and this is the final opinion in madhhab al-Syafie. Thus, he has to choose another nickname for himself or another name of his son’s and it does not necessarily be the eldest son.

However, we are inclined towards the opinion of the majority of the salaf, jurists and scholars who ruled it permissible to use the moniker of “Abu al-Qasim” for the prohibition is abrogated after the death of the Prophet PBUH. This is also the opinion of Imam al-Nawawi as stated by Imam al-Khatib al-Syarbini in his book. (See: Mughni al-Muhtaj, 1/101)

To conclude, the hadith mentioning the prohibition of the usage of the moniker is sahih (muttafaqun ‘alaih) for it is narrated by Imam al-Bukhari and Imam Muslim. Furthermore, it is permissible to use the moniker “Abu al-Qasim” according to our above explanation. Lastly, may Allah SWT give us all understanding in this religion for us to practise and convey to others. Amin