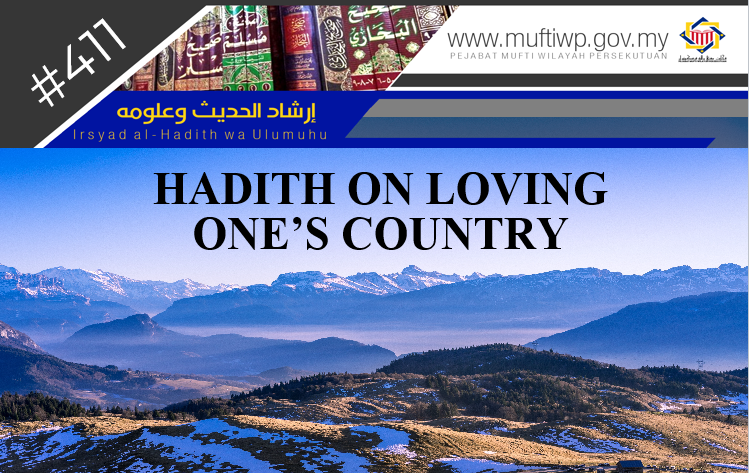 “Loving one’s country (patriotism) is a part of the sign of faith,”

The love for one’s country is one of the good attributes and encouraged in Islam. However, this religion prohibits the attribute of ta’assub (fanatic) for certain nation or race for Islam is a religion of blessing for the whole world. In conjunction with the coming of the month of independence, most people will start to find the benefits or advantages of loving one’s country and others. Hence, in this series of Irsyad al-Hadith, we will explain the status of the hadith regarding patriotism is a part of iman.

According to the above hadith, before we state our opinion regarding the status of the hadith, we would like to first cite the opinions of scholars regarding this hadith:

According to Imam al-‘Amiriy (1143H) in his book, the statement is not from the Prophet PBUH. However, it is narrated by Ibn Abi Hatim from al-Dhahhak, who said:

When the Prophet PBUUH travelled out from Mecca and arrived in al-Juhafah, he missed Mecca. The Allah SWT revealed the following verse:

“Indeed, [O Muhammad], He who imposed upon you the Qur'an will take you back to a place of return.”

The place of return is Mecca. Al-Asma’iy said: I heard an a’rabiy (foreigner) said: If you want to know someone, then observe how he loves his country, misses his family and cry over the passing of time. (See al-Jadd al-Hathith fi Bayan ma Laisa bi Hadith, 1/85)

Based on the opinions of the above hadith scholars, in our opinion the hadith is unauthentic and fake. Hence, we are prohibited from saying that it is from the Prophet PBUH and state that it is fake.

To conclude, coming back to the above question, the hadith stating loving one’s country is a part of faith is fake and not from the Prophet PBUH. However, it is not wrong for someone to love his country or the place where he was born for it is in the nature of humans, for the Prophet PBUH himself loves the place he was born, which is Mecca. This is mentioned in a hadith:

"How sweet of a land you are and how dear you are to me, and if it were not that my people expelled me from you, I would not have lived in other than you."

Lastly, may Allah SWT give us the strength and understanding in this sacred religion. Amin.