IRSYAD AL-HADITH SERIES 412: THE DIFFERENCES BETWEEN AL-GHUFRAN AND AL-MAGHFIRAH IN THE QURAN 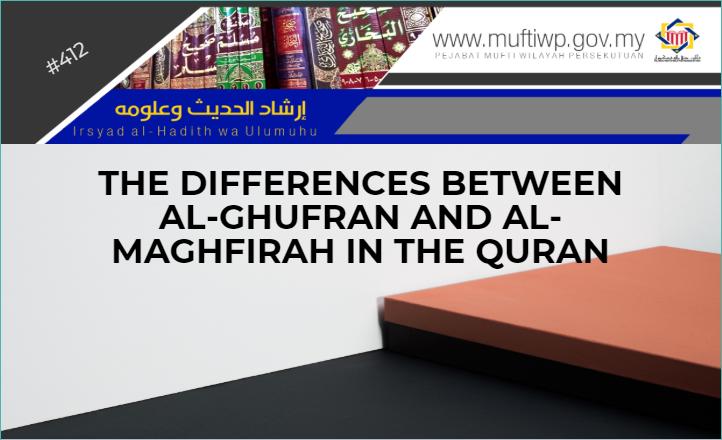 Al-Quran is a book of miracles revealed by Allah SWT to the Prophet Muhammad PBUH through Gabriel AS. It also contains 1001 secrets for those who tadabbur (contemplate and ponder) on it. One of them is the virtue of the selection of words itself.

Addressing the above question, this series of Irsyad al-Hadith will explain the differences between al-Ghufran (الغفران) and al-Maghfirah (المغفرة) in the Quran. Before we go further, Imam al-Raghib al-Ashbahani stated that both al-Ghufran and al-Maghfirah mean Allah’s protection upon His servants from the Hellfire. [Refer: Mufradat Alfaz al-Quran, 609]. Besides, the phrase al-Ghufran (الغفران) is only mentioned once in the Quran which is in Surah al-Baqarah.

And they say, "We hear and we obey. [We seek] Your forgiveness, our Lord, and to You is the [final] destination."

While, the phrase al-Maghfirah (المغفرة) is mentioned 28 times in the Quran. Among them are:

“…but Allah invites to Paradise and to forgiveness, by His permission,”

According to Dr Fadhil Soleh al-Samira’iy in his book, he mentioned the differences between the two words even if both of them means forgiveness. There are two differences mentioned on this matter, which are: [Refer: Min Asrar al-Bayan al-Qur’ani, 19]

“While Allah promises you forgiveness from Him and bounty,”

The saying of Allah SWT in the Quran:

“Kind speech and forgiveness are better than charity followed by injury.”

Hence, both phrases mean the same which is forgiveness. However, in terms of usage, the phrase al-Maghfirah is more general, not only limited to Allah SWT, but is also used by other than Allah SWT.

In conclusion, there are many miracles and secrets in the Quran as it is the words of Allah SWT. The reason is, each and every words or phrase used contain their own virtues and only those who truly tadabbur on them will get to know the essence of it. Lastly, may Allah SWT make us be among the ahl al-Quran and those who always love as well as practice its teaching in their daily life. Ameen.