IRSYAD AL-HADITH SERIES 419: THE BENEFITS OF RECITING THE LAST TWO VERSES OF AL-BAQARAH 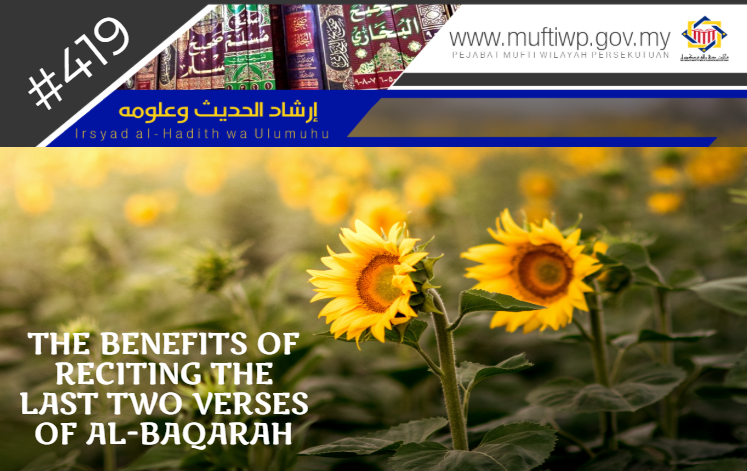 What is the meaning of this hadith?

"If somebody recites the last two Verses of Surat al-Baqarah at night, it will be sufficient for him.”

The Quran is a miraculous book revealed by Allah SWT to his messenger the Prophet Muhammad PBUH through the intermediary of the angel Gabriel AS. Furthermore, the Quran includes a thousand and one secrets and wisdoms for those who contemplate and recite it. Other than that, there are numerous benefits for those who always recite and practice the verses of the Quran according to the authentic evidences of the Quran itself as well as the hadith of the prophet PBUH.

According to the above question, among the meanings of it will be sufficient for him as stated in the above hadith, Imam al-Hafiz Ibn Hajar al-Asqalani commenting on the hadith in his book, it is divided into several meanings:

The Messenger has believed in what was revealed to him from his Lord, and [so have] the believers. All of them have believed in Allah and His angels and His books and His messengers, [saying], "We make no distinction between any of His messengers." And they say, "We hear and we obey. [We seek] Your forgiveness, our Lord, and to You is the [final] destination." Allah does not charge a soul except [with that within] its capacity. It will have [the consequence of] what [good] it has gained, and it will bear [the consequence of] what [evil] it has earned. "Our Lord, do not impose blame upon us if we have forgotten or erred. Our Lord, and lay not upon us a burden like that which You laid upon those before us. Our Lord, and burden us not with that which we have no ability to bear. And pardon us; and forgive us; and have mercy upon us. You are our protector, so give us victory over the disbelieving people."

To conclude, there are many benefits for those who recite the last two verses of al-Baqarah during the night, understanding and practising them in their daily lives. Furthermore, the hadith that states the benefits of it is an authentic hadith from Sahih al-Bukhari which is the second authentic book after the Quran. Lastly, may Allah SWT make us from among the people of the Quran and those who love and practise the Quran. Amin.