IRSYAD AL-HADITH SERIES 421: THE STORY OF ABU UBAIDAH RA KILLING HIS OWN FATHER 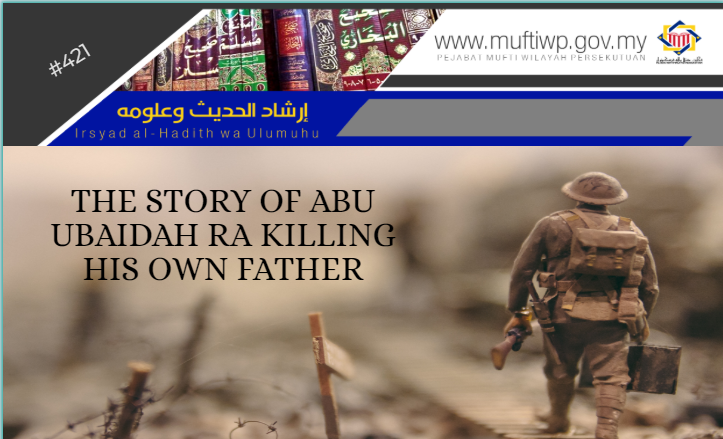 Is the claim that Abu Ubaidah RA killed his own father true?

Most commentary scholars commented on the 22nd verse of Surah al-Mujadalah by stating the cause of revelation of it (sabab al-nuzul) is the event of the murder of Abu Ubaidah RA’s father. Among those who state this is Imam Ibn Kathir in his book of commentaries where he cited the opinion of Said bin Abd al-Aziz which is:

“Said bin Abd al-Aziz and others who narrated from him stated that this verse (لَّا تَجِدُ قَوْمًا يُؤْمِنُونَ بِاللَّـهِ وَالْيَوْمِ الْآخِرِ) [Al-Mujadalah: 22] was revealed to Abu Ubaidah ‘Amir bin Abd Allah bin al-Jarrah when he killed his own father on the war of Badr” [Refer: Tafsir Ibn Kathir, 8/54]

Referring back to the question asked, this narration or story is recorded by Imam al-Hakim, al-Baihaqi as well as Imam al-Thabarani. For Imam al-Tabarani, he narrated this story in his book under the chapter of the killing of Abu Ubaidah’s father in the war of Badr.

“The father of Abu Ubaidah keeps on chasing his son in the war of Badr, but Abu Ubaidah tried his best to avoid him. When the chase became more persistent, he then faced his father and managed to kill him. Then, Allah SWT revealed this verse from the beginning to the end when the event took place”

You will not find a people who believe in Allah and the Last Day having affection for those who oppose Allah and His Messenger, even if they were their fathers or their sons or their brothers or their kindred. Those - He has decreed within their hearts faith and supported them with spirit from Him. And We will admit them to gardens beneath which rivers flow, wherein they abide eternally. Allah is pleased with them, and they are pleased with Him - those are the party of Allah. Unquestionably, the party of Allah - they are the successful

Upon reviewing the above narrations, we hereby state that the narration is dhaif (weak) due to the discontinuation in the sanad (chain of narrators). In addition, Imam Ibn Hajar used sighah tamridh (passive voice) when narrating this story that Abu Ubaidah RA killed his father. He mentioned it himself (Ibn Hajar al-Asqalani) in Fath al-Bari where he stated:

“His father was killed (father of Abu Ubaidah), who was a disbeliever in the war of Badr and it is said that the one who killed him was his own son (Abu Ubaidah). This is narrated by al-Tabarani and others by the chain of Abdullah bin Syazub in mursal way (where the Companions of the Prophet PBUH are absent from the chain).” [Refer: Fath al-Bari, 7/93]

In conclusion, indeed there are narrations which state that among the cause of revelation (asbab al-nuzul) for verse 22 in surah al-Mujadalah is based on the event of killing of Abu Ubaidah al-Jarrah’s father in the war of Badr. However, the narration is dhaif (weak) due to the discontinuation of narrators in the chain as evaluated by scholars. Also, it is not a problem to narrate this story when commenting on the 22nd verse of Surah al-Mujadalah because the story has no relation to the issue of aqidah (faith/creed) or Shari’ah (rulings), but more of a historical fact. This is because, a number of mufassirun commenting on the verse included this narration. Lastly, may Allah SWT give us strength in achieving knowledge as well as the true understanding in religion. Ameen.