IRSYAD AL-HADITH SERIES 422 : MY COMPANIONS ARE LIKE THE STARS 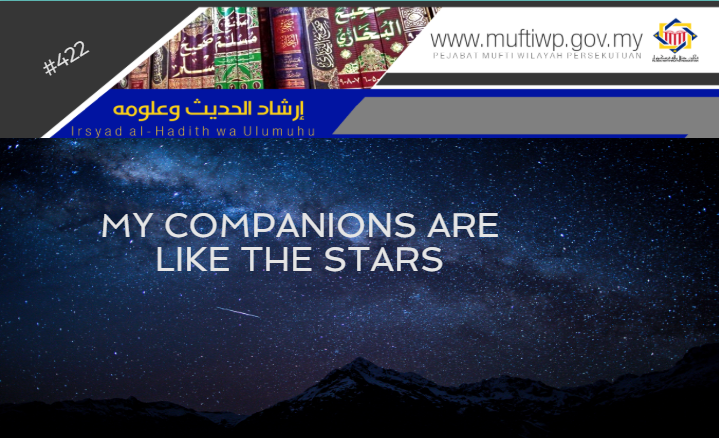 What is the meaning and status of this hadith?

Besides, it is stated in the Quran that Allah SWT bless the companions and provide them with gardens where water flows beneath them:

Furthermore, The Prophet PBUH also forbids any form of degradation towards his companions as mentioned in his saying:

"Do not abuse my companions for if any of you spent gold equal to Uhud (in Allah's Cause) it would not be equal to a Mud or even a half Mud spent by one of them."

Referring back to the above question, Imam al-Baihaqi cited a narration which is almost similar with the above narration in his book, [Refer: al-Madkhal ila ‘Ilm al-Sunan, 2/580] as well as Imam al-Khatib al-Baghdadi in his book. [Refer: al-Kifayah fi ‘Ilm al-Riwayah, 1/48] which is:

In conclusion, as a mu’min who loves the Prophet PBUH, we should preserve the reputation and physical being of the Prophet PBUH from any falsehood and accusation which comes from unauthorized persons. This is the sign of our love and adoration towards the Prophet PBUH as mentioned in his saying:

“None of you will have faith till he loves me more than his father, his children and all mankind,”

Furthermore, it is our obligation before reading, writing, teaching, conveying or spreading on any particular hadith to first determine its source and status to avoid from being involved in the warning of the Prophet PBUH by not doing so. This is to preserve the purity of Islam as well as shielding it from any form of deprivation. The above hadith is not sahih and we are absolutely not permitted to spread it to others. Lastly, may Allah SWT preserve our lips from conveying and spreading hadiths which are not sahih. Ameen.