IRSYAD AL-HADITH SERIES 423: THE HADITH STATING THE BLESSINGS OF ALLAH SWT FOR THOSE WHO KNOW THEIR CAPABILITY 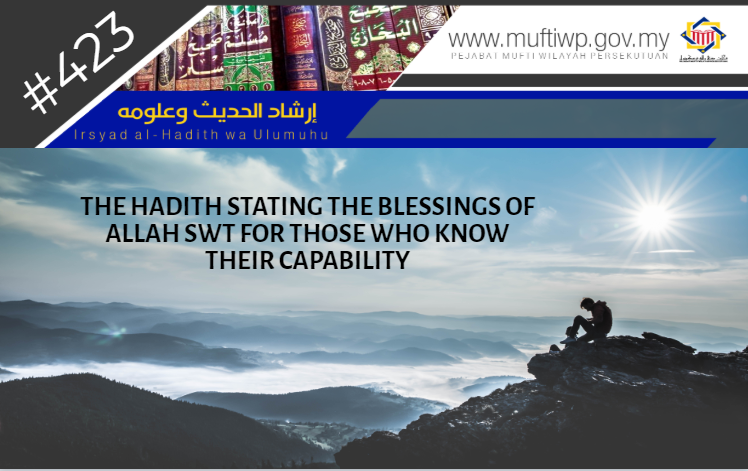 “Allah bless those who know their capabilities,”

According to the above question, we did not find the hadith in any renown hadith books, except a narration which is said to be from Caliph Umar bin Abd Aziz as stated by Imam al-Qurthubi. Imam al-Qurthubi said in his commentary:

Although the hadith or narration is not from the Prophet PBUH, but the meaning is authentic for when a person knows his own capabilities and limitations, then he will be more obedient and motivated to perform worship and put their hope in Allah so that he will not waste even a second. Furthermore, if a person who knows his own capabilities faced with other people, then it will save him from being arrogant, self-absorbed, cocky and others. This usually happens to students when they are given some knowledge, they then begin to think then only they know and understand the subject matter. In truth, it is a test from Allah SWT for students to always protect their hearts and realize that all that Allah SWT has given is actually incomparable to the knowledge of Allah SWT as stated by Allah SWT in the Quran:

“And mankind has not been given of knowledge except a little."

To conclude, the origin of the narration or hadith is unknown, where it cannot be found in any renown hadith books with the exception of a narration regarding Caliph Umar bin Abd al-Aziz. Lastly, may Allah SWT protect our hearts and subsequently make us from among His slaves who are saved from bad character and conduct. Amin.