IRSYAD AL-HADITH SERIES 445: THE MEANING OF TIME PASSES BY QUICKLY IN THE END OF TIMES 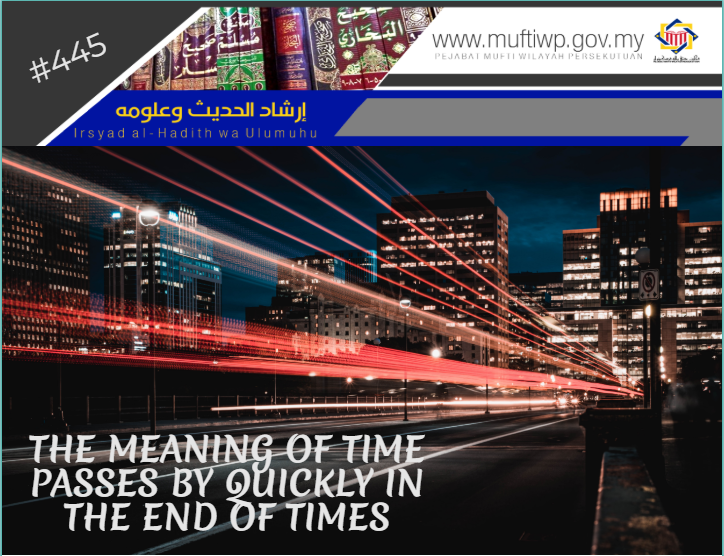 What is the meaning of time passes rapidly in the end of times?

The world today is full of extraordinary things that happened which make us feel as if the doomsday is near. This shows us that the ummah living in the end of times will face various grievous tests, fitnah and tribulations. This is because, only with a firm faith and the correct knowledge would we be able to overcome the tests, fitnah and tribulations.

Based on the above question, time passes by rapidly or swiftly is included as one of the signs of doomsday. This is in accordance with several sahih hadith, among them:

"The Hour (Last Day) will not be established until (religious) knowledge will be taken away (by the death of religious learned men), earthquakes will be very frequent, time will pass quickly,

The above hadith or the meaning of time passes quickly may be understood through a hadith narrated by Anas bin Malik as recorded by Imam al-Tirmidhi in his sunan or jami’, which is:

Imam Ibn Hajar al-Asqalani cited some opinions in understanding the meaning of time passes quickly like the shortening of age, shortening of night and day as supported by other hadith which states that time would pass so swiftly that a year would feel like a month and people would be in continuous ignorance. [See Fath al-Bari, 1/171]

Besides, Imam al-Nawawi follows the opinion of ‘Iyadh and others who hold the opinion that the meaning of time passing quickly is because the blessing of time is lost and a whole day of doing beneficial deeds is equivalent to only an hour of doing so. [See: Fath al-Bari, 13/17]

Therefore, among the signs of the doomsday is the feeling that time passes too quickly due to the loss of blessings (in life), insufficient good deeds for the hereafter, wasting time on unimportant and unbeneficial actions that its (time) value is lost, just like the passing of clouds where a person does not feel like he is aging or living, except for while during the day. [See Fath al-Mun’im, 10/208]

Hence, in our opinion the meaning of time passes by quickly means the loss of blessings of time in our lives. When this happens, it will show in the decrease of worship and good deeds in our lives. This is as stated above by Imam al-Nawawi where most of the time would be spent on useless matters.

In conclusion, the hadith expatiate how quickly time passes in the end of times as narrated by Imam al-Bukhari and Imam Muslim in their Sahih books. In addition, in the end of times, the blessings of time will fade bit by bit to the extent that people would feel as if time is passing by quickly or swiftly. This is emphasized in the Quran in Surah al’Asr: