IRSYAD AL-HADITH SERIES 447: THE STORY OF BILAL DREAMING OF MEETING THE PROPHET PBUH 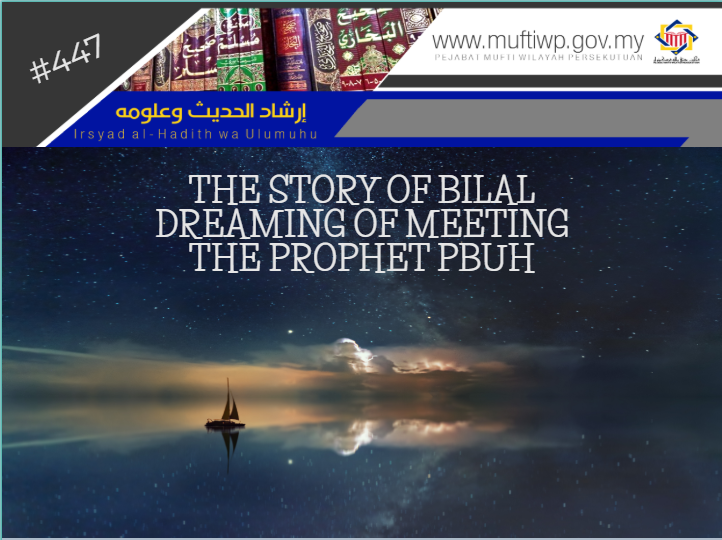 Is the story of Bilal RA who dreamt of meeting the Prophet PBUH after he passed away true?

Reading on the life of the Companions is a praised and highly recommended act. This is because, they lived in the best of times as stated by the Prophet PBUH and during the times when revelation came to the Prophet PBUH. Therefore, we could follow and take lessons from their stories.

Based on the above question, here, we would like to cite some texts related to the story as mentioned in the books of the scholars:

The Text of the Story Where Bilal RA Dreamt of Meeting with the Prophet PBUH After He Passed Away:

“Then Bilal dreamt of meeting with the Prophet PBUH in his sleep. Then, he was reprimanded by the Prophet PBUH’s words: “O Bilal! How hard and dry your heart is. Have you not been missing me? It has been so long since you last visited me.” Bilal was awakened while he was in a state of sadness and fear. He quickly rode his horse to Medina and visit the Prophet PBUH’s grave. Then, he cried wiped his face at the grave. Then, al-Hasan and al-Husain came. Both hugged and kissed him while saying: “O Bilal! We miss your call of adhan as the time before where you call the adhan for the Prophet PBUH on suhoor (before Subh prayer time).” Bilal then fulfilled their request and called out the adhan from the roof of the same place he used to be when calling out the adhan (during the time of the Prophet PBUH). When hearing his voice saying “Allahu Akbar! Allahu Akbar!”, the city of Medina is shaken by it. When he uttered the syahadah, the shake is getting stronger, that when he uttered “Asyhadu anna Muhammadar Rasulullah!”, the people of Medina went out of their houses while saying, “Is the Prophet sent again?”. Verily, there is no day of more tears from men and women in Medina after the passing away of the Prophet PBUH other than that day…” [See: Tarikh Dimashq, 7/137 and Usd al-Ghabah, 1/415]

This story is cited in a book Tarikh Dimashq by Ibn Asakir and Ibn al-Athir in Usd al-Ghabah. Here, we try to include several opinions of scholars in evaluating the status of this story, among them:

Referring to the above opinions of the scholars, we are inclined towards the opinion which states that the above narration or story is not sahih as the opinion held by Imam Ibn Abd al-Hadi, Imam al-Zahabi and Imam Ibn Hajar al-Asqalani. Even though it is a non-sahih story, it does not deny the love and admiration Bilal RA has towards the Prophet PBUH. Besides, some scholars are being tasahul (do not put strict conditions) in accepting any narrations pertaining to this matter. In addition, Imam al-Zahabi cited another narration on the calling out of adhan by Bilal RA after the passing of the Prophet PBUH, which is:

“We came to Syam with Umar RA, then Bilal RA called out the adhan. Then, people (who were there) were reminded of the Prophet PBUH (upon hearing the adhan called out by Bilal RA). I never see other day where people tear up the most other than this.” [See: Siyar A’lam al-Nubala’, 1/357]

In conclusion, this story is not sahih as firmly stated by Imam al-Hafiz Ibn Hajar al-Asqalani and there are scholars who view that it is sahih. Lastly, may Allah SWT shape our akhlak like the akhlak of the salaf soleh in loving the Prophet PBUH by placing Allah SWT and the Prophet PBUH above everything. Amin.