IRSYAD AL-HADITH SERIES 450: IS IT TRUE THAT THE SWEAT OF THE PROPHET PBUH IS STORED TO THIS DAY? 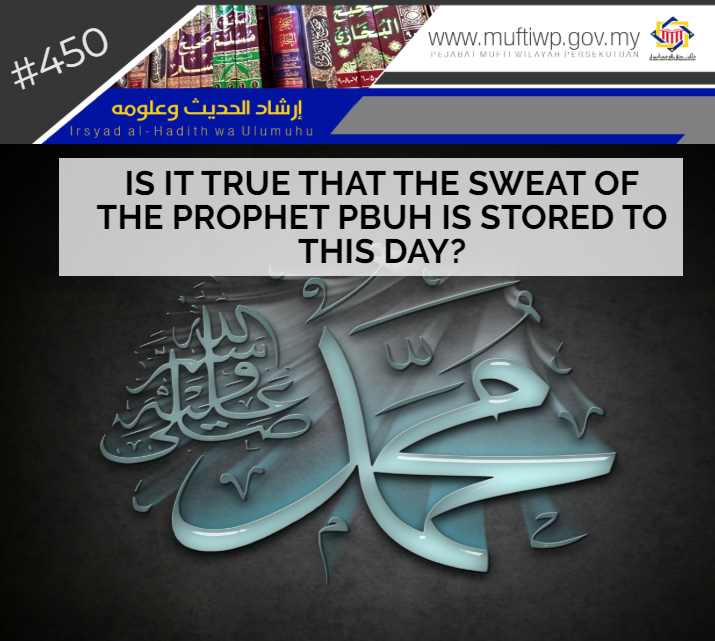 Assalamualaikum. I want to ask for your opinion. Recently, my wife told me that she got the chance to smell the sweat of the Prophet PBUH. Her colleague was the one who gave her the chance to smell it. She was so happy saying that it was a form of blessing from Allah SWT and it made her love and longing to meet the Prophet PBUH stronger. I’m confused. Is it true that the sweat of the Prophet PBUH can be stored up to this day? I’m worried that it is a tactic to manipulate or compel others to follow deviant teaching. I’m an ignorant person in these matters. Hope for an explanation from you.

It is an obligation and a necessity for every Muslim to learn and know about the life of the Prophet PBUH. Especially if it involves the characteristics of the Prophet PBUH for he is the best example in every aspect of our lives, regardless of whether it is in this world or the hereafter. This can clearly be understood through the statement of Allah SWT:

“There has certainly been for you in the Messenger of Allah an excellent pattern for anyone whose hope is in Allah and the Last Day and [who] remembers Allah often.”

Syeikh Mustafa al-Maraghi said the above verse meant that the best and most excellent of example is the Prophet PBUH. Thus, if you want to follow anyone, the Prophet PBUH is the best example to follow. The example and practises of the Prophet PBUH should be followed and we should be on the manhaj that he taught us. It is if you are searching and hoping for rewards of Allah SWT and fears His severe punishments. (Refer Tafsir Al-Maraghi, 21/146)

This means that every Muslim should try his best to learn and follow the character of the Prophet PBUH especially in matters related to the Prophet PBUH’s character for it is crucial in today’s time which is full of challenges and fitnah.

There are numerous narrations which explained about the sweat of the Prophet PBUH. Among them are:

Allah's Apostle (ﷺ) visited her house and (took rest) and she spread a piece of cloth for him and he had had a siesta on it. And he sweated profusely and she collected his sweat and put it in a perfume and in bottles. Allah's Apostle (ﷺ) said: “Umm Sulaim, what is this?” She said: “It is your sweat, which I put in my perfume.”

“I prayed along with Allah's Messenger (ﷺ) the first prayer. He then went to his family and I also went along with him when he met some children (on the way). He began to pat the cheeks of each one of them. He also patted my cheek and I experienced a coolness or a fragrance of his hand as if it had been brought out from the scent bag of a perfumer.”

These are among the sahih hadiths which explain the smell of the sweat of the Prophet PBUH. Every Muslim should learn hadiths such as these, whether he is old or young. The purpose is so that we know the real matter regarding the perfection of the character of the Prophet PBUH and it would prevent us from being deceived by others who like to claim something is from the Prophet PBUH when in truth it is not so.

As it is in the discipline of the science of hadith which emphasizes on the sanad in determining the sahih status of anything related to the Prophet PBUH, then in matters such as this, we need to tawaqquf until there is a clear proof or evidence. Furthermore, due to the great distance in time between our time and the time of the Prophet PBUH, it is impossible for a person to have kept the sweat of the Prophet PBUH for more than 1400 years without denying the greatness and honour of the Prophet PBUH.

We discussed in-depth regarding the issue of the exhibition of athar of the Prophet PBUH and its Rulings in Bayan Linnas Series 19. [1]

"Whoever tells a lie against me intentionally, then (surely) let him occupy his seat in Hell-fire."

A person should always attend religious classes, ask questions to experts of the field to avoid getting deceived by irresponsible parties. Following the sunnah of the Prophet PBUH is not only through our love for him but how much of the sunnah and character of the Prophet PBUH that we follow in our daily lives.

May Allah SWT distance us from deceivers in the name of religion. Wallahua’lam.