IRSYAD AL-HADITH SERIES 451: THE ADVANTAGES OF BELIEVING IN THE PROPHET PBUH WITHOUT EVER MEETING HIM 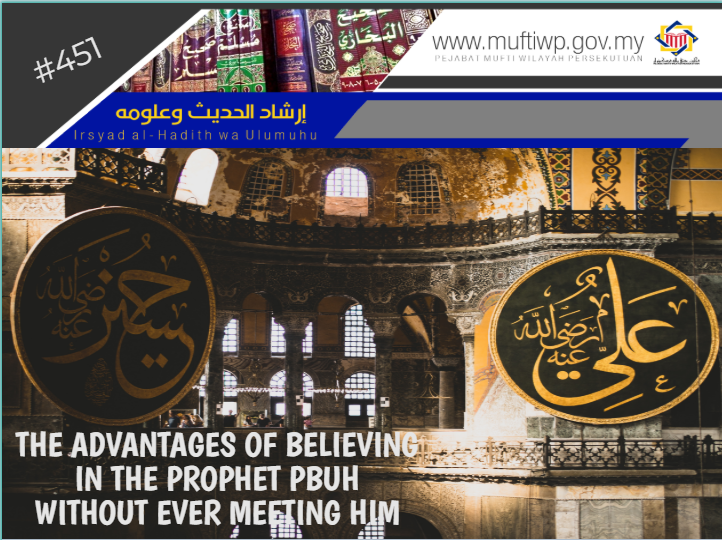 The Prophet PBUH is an honourable man and the most noble among the creations of Allah SWT on the earth. Besides, all believing Muslim wants to be with the Prophet PBUH just like the experience of the Companions. Also, Allah SWT said that we are the best of nations for having the best prophet among other prophets.

Allah SWT said in the Quran:

“You are the best nation produced [as an example] for mankind. You enjoin what is right and forbid what is wrong and believe in Allah.”

This verse shows that Allah SWT praise this nation by stating them as the best nation created by Allah among other humans. This is due to the completeness inside of them by having faith and commitment in obeying Allah’s commandments as well as completing others by enjoining what is right and forbidding what is wrong. [See: Taysir al-Karim al-Rahman, 143]

Before we cite scholars’ opinions on this hadith, we would like to first state the source of this hadith which is narrated by some companions of the Prophet PBUH. Among them are Abu Sa’id al-Khudri RA, Ibn Umar RA, Anas bin Malik RA, Abu Umamah RA, Abu Hurairah RA and Wa’il bin Hujur RA. This narration exists in Musnad Imam Ahmad. [See: Musnad Ahmad, (11673) 18/211]. Besides, this hadith is also narrated by Imam al-Thabarani in his three Mu’jam. [See: u’jam al-Kabir, 8/259-260, Mu’jam al-Awsat, 6/171, Mu’jam al-Saghir, 2/104]. Also, there is a difference in the phrase ثُمَّ طُوبَى لِمَنْ آمَنَ بِي وَلَمْ يَرَنِي. Pertaining to the status of this hadith, the scholars have differing opinion on this:

According to the above opinions of scholars, we say that each sanad of this hadith is not free from critics from the scholars as there are narrators who are viewed as dhaif, matruk or munkar. Hence, we are inclined that the status of the above hadith is hassan li ghairihi due to the existence of syawahid for the hadith.

Besides, the scholars have differing opinions on stating the meaning of “طُوبَى” in the hadith. Some said that it is a tree in Paradise as mentioned in the hadith or what is meant by “طُوبَى” is the Paradise and etc.