IRSYAD AL-HADITH SERIES 453: THE MEANING OF HADITH A PERSON DOES NOT COMMIT FORNICATION WHILE HE HAS FAITH 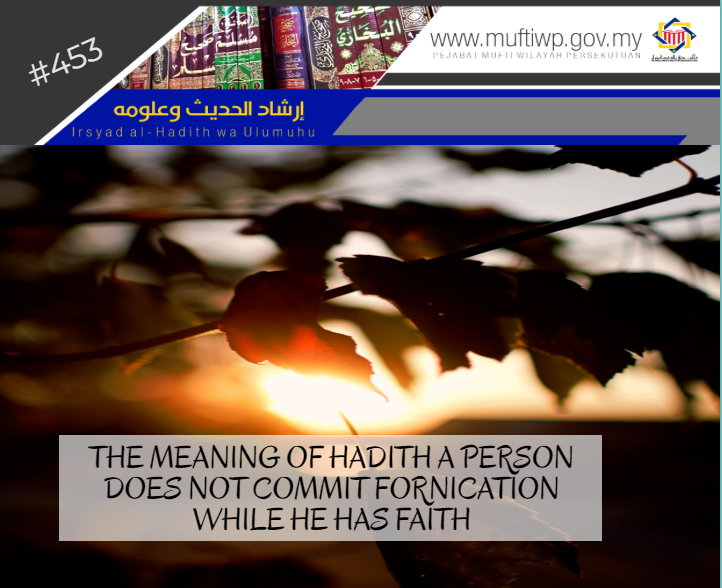 What is meant by the hadith ‘a person does not commit fornication or drink alcoholic beverage when he has faith’?

Based on the above question, the hadith meant is a sahih hadith narrated by the Shaikhain which are Imam al-Bukhari and Muslim in their sahih books:

Faith has over seventy branches or over sixty branches, the most excellent of which is the declaration that there is no god but Allah, and the humblest of which is the removal of what is injurious from the path: and modesty is the branch of faith.

The meaning of the hadith is explained by Imam al-Nawawi, where scholars have differing opinions in understanding the hadith. However, the most accurate opinion among the ahl al-tahqiq is one may not commit any ma’siah (sins/transgressions) while having perfect iman. Therefore, the denial of iman in this hadith is the denial towards its perfection as mentioned in ‘There is no knowledge except beneficial knowledge and there is no life except the life in the hereafter.’

In addition, it is a scholarly consensus (ijma’) that a fornicator, a burglar, a murderer and those who commit great sins except of syirk are not considered as someone who has denounced Islam, but it is a sign of their weak iman. If they repent, then punishments will be lifted from them, but, if they continuously commit those great sins, then it is Allah Who will decide whether to forgive them and place them in paradise or to first punish them before they are able to enter paradise. [See: al-Minhaj Syarah Sahih Muslim, 41-42/2]

Besides, this hadith strongly forbid anyone from committing any great sins and warning them with the punishments which will be imposed on them for their wrongdoings as well as a threat of losing their  iman when they commit such acts. This is because, those acts will weaken their iman as iman is weakened by ma’siah and it is feared that the doers will fall into kufr (disbelief). [See: Fath al-Mun’im, 1/212]

In conclusion, committing great sins may not nullify a person’s iman nor does it mean that they have denounced Islam except if the actions are the actions of syirk. In addition, denial in the above hadith means a denial on the perfection of iman of those who commit sins and ma’siah. This is due to iman increases in obedience and decreases by ma’siah or sins committed as mentioned by the scholars. Therefore, we are encouraged us all to always protect ourselves from sins or ma’siah so the iman within us becomes a perfect iman. Lastly, may Allah SWT grant firmness in our heart, tongue and actions in faith as well as obedience towards Him only. Amin.