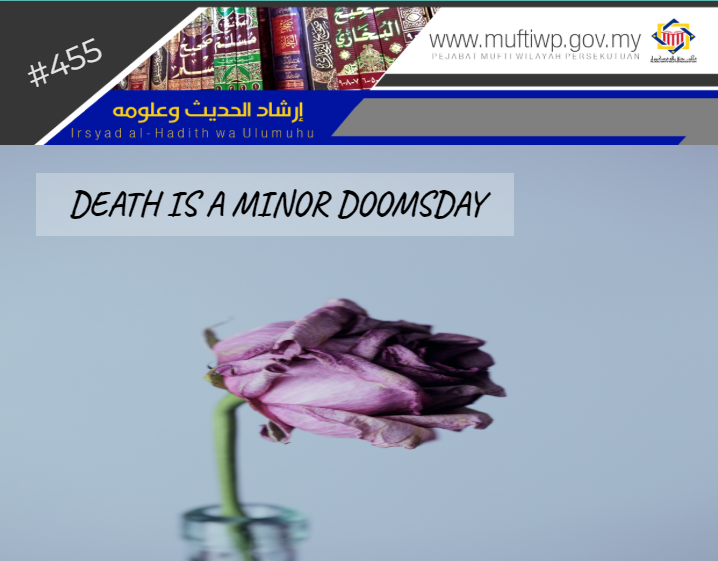 Is it true that death is a minor doomsday?

Death is a certainty for every living thing. This is because Allah SWT has stated clearly in the Quran that death will surely come to humans and it will not be coming even a minute faster or later:

And for every nation is a [specified] term. So when their time has come, they will not remain behind an hour, nor will they precede [it].

Syeikh al-Zuhaily when interpreting this verse states that every nation among the existing nations, as well as each generation of the existing generations, have their own specified age as in the knowledge of Allah SWT. When the specified age reaches the end, then his life will end and he will leave the world without it being faster or later for even a minute. [See: Tafsir al-Wasit, 5/267]

Based on the above question, there is a hadith which indicates or states that death is a minor doomsday as narrated by Imam al-Bukhari and Muslim:

Some rough Bedouins used to visit the Prophet (ﷺ) and ask him, "When will the Hour be?" He would look at the youngest of all of them and say, "If this should live till he is very old, your Hour (the death of the people addressed) will take place."

In addition, Syeikh Dr Sulayman al-Ashqar stated in his book that the definition of a minor doomsday is death. Therefore, when a person passes away, he is undergoing a doomsday.

In conclusion, we have no power to decide on the place and time of our death as it is the right of Allah SWT. We are commanded to always be ready by performing many good deeds in this world so that these will drive us to Allah SWT’s paradise. May Allah SWT bless us with a good ending. Ameen.