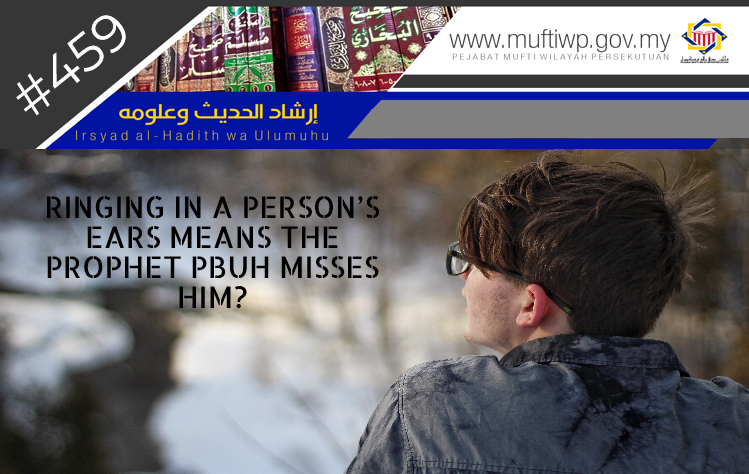 Is it true that if there is a ringing in a person’s ears it means the Prophet PBUH misses him?

The Prophet Muhammad PBUH is a special human and the best example for all as recorded by Allah SWT in the Quran. Furthermore, it is an obligation on us to love the Prophet PBUH as stated in a verse in surah al-Tawbah:

Say, [O Muhammad], "If your fathers, your sons, your brothers, your wives, your relatives, wealth which you have obtained, commerce wherein you fear decline, and dwellings with which you are pleased are more beloved to you than Allah and His Messenger and jihad in His cause, then wait until Allah executes His command. And Allah does not guide the defiantly disobedient people."

Syeikh al-Sa’di said that the above noble verse states our obligation in loving the Prophet PBUH more than anything.

According to the above question, first we will cite the narration where it is mentioned that it is said if a person hears a ringing in his ears, then it is a sign that the Prophet PBUH misses him.

“When there is a ringing in one’s ears, then he should recite praise and salutations upon me and say: May Allah SWT reminds me of the one who is reminded of me with goodness.”

The above narration is narrated by Imam al-Thabarani in al-Mu’jam al-Awsath (9222), al-Mu’jam al-Saghir (1104) and al-Mu’jam al-Kabir (958). Furthermore, it is also narrated by Imam Ibn al-Sunni in his book ‘Amal al-Yaum wa al-Lailah (166). Thus, here, we include the opinions of scholars in determining and evaluating the status of this hadith:

We are inclined towards the opinion that the hadith is not sahih. Hence, it is impermissible and haram for us to narrate a hadith which is not sahih when we know of its status (mawdu’) unless when explaining that it is fabricated.

To conclude, the above hadith is not sahih and it is haram to spread or narrate the hadith unless in stating that it is fabricated as explained above. It is included as an obligation for us in maintaining and protecting our Prophet Muhammad PBUH from any form of deception that is referred to be from him. Furthermore, identifying the sahih status of a hadith is important for the Prophet PBUH warns against those who lie on his name (hadith). This is stated in a hadith of the Prophet PBUH:

"Whoever narrates a Hadith from me thinking it to be false, then he is one of the liars."

Lastly, may Allah SWT make us from among those who love knowledge and bless us with understanding in religion and protect us from making mistakes in narrating the hadith of the Prophet PBUH. Amin.