IRSYAD AL-HADITH SERIES 462: HADITH ON SUNNAH PRAYER AS A GIFT FOR THE DECEASED 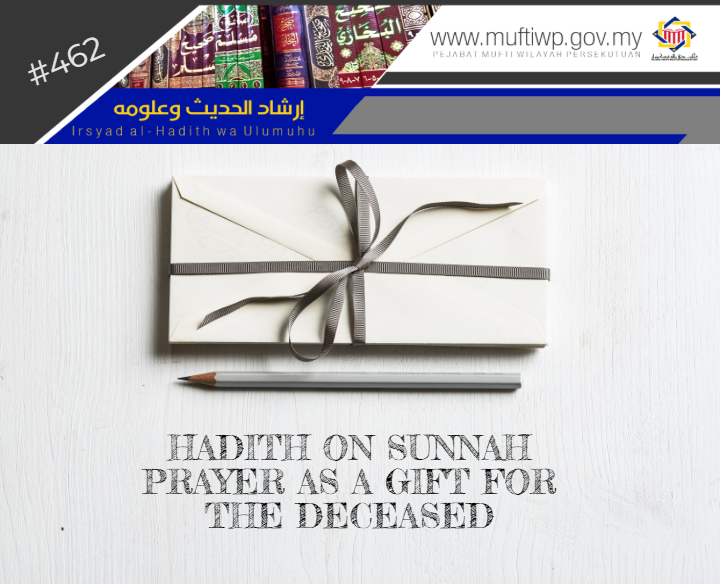 Did the Prophet PBUH ever perform Sunnah prayer as a gift to others?

Before we go in detail on sunnah prayer performed as a gift to others, we would like to first explain whether those who passed away will receive the rewards of worships done by those who are still alive for them.

This has been discussed by Imam al-Nawawi in his book that there was an ijma’ (scholarly consensus) that du’a for the deceased will still benefit them as mentioned in the saying of Allah SWT in the Quran:

“And [there is a share for] those who came after them, saying, "Our Lord, forgive us and our brothers who preceded us in faith and put not in our hearts [any] resentment toward those who have believed. Our Lord, indeed You are Kind and Merciful."

While pertaining to reciting al-Quran, there are differing opinions. The famous opinion from madhhab al-Shafi’e is the rewards of the recitation will not reach the deceased. However, there is a group of Imam al-Shaf’ie’s ashab who are of the same opinion as Imam Ahmad and a group of other scholars by stating that the recitation will give benefit and the rewards will reach the deceased. And what is prioritised for those reciting the Quran is to say directly after completing the recitation by: “O Allah, deliver the rewards of this recitation to so and so.” and it is sunnah to also praise and state his good deeds. [See al-Azkar, 164]

Reviewing the opinion of Imam al-Nawawi, the deceased will receive the rewards of the living for him. Based on the above question, there is a hadith which is used as the dalil (evidence) of gifting sunnah prayer as recorded in some past Jawi books like the book of Perkununan Besar [See: Kitab Perukunan Besar, 21] written by Syeikh Muhammad Arshad al-Banjari (Shafi’e scholar from Banjar land, Indonesia).

The same is stated in the book Nihayah al-Zain by Syeikh Muhamad Nawawi al-Jawi al-Bantani (Shafi’e scholar from Banten, Indonesia) and he supported this opinions with a hadith that narrated without the inclusion of its sanad using sighah tamridh (this sighah tamridh usually used to narrate weak hadith):

Among them are (Sunnah prayer) which is a two rakaat Sunnah prayer for the deceased. It is narrated from the Prophet PBUH where he PBUH said: “On the first night when the deceased is buried, he will be anxious. So, sympathize with him and reduce his anxiety through sadaqah. If one is unable to give sadaqah, then perform two rakaat prayer and recite in each rakaah surah al-Fatihah once, surah al-Takathur once, the ayatul kursi once and 10 times surah al-Ikhlas, then, he should make du’a after giving salam with the du’a:

‘O Allah, Indeed, I have performed this salah, while You are the All-Knowing of what I intended. O Allah, deliver the reward to the grave of so and so’. Surely, Allah SWT will send to him on that moment one thousand angels to the grave which is surrounded by lights and gifts as well as becoming merciful to them until the trumpet is blown.” [See: Nihayah al-Zain fi Irsyad al-Mubtadi’in, 1/107]

Moreover, this hadith is also recorded in the book Hadiyyah al-Ahya’ al-Amwat [See: Hadiyyah al-Ahya’ al-Amwat wa ma Yasilu Ilaihim, 1/185] by Abu Hassan Ali bin Ahmad bin Yusuf bin Ja’far al-Hakkari (486h). Imam al-Zahabi in his book Siyar A’lam al-Nubala’ once said that Syeikh al-Hakkar is a zuhud sophist. However, according to Ibn Asakir, he held the opinion that Syeikh al-Hakkari is not thiqah (trustworthy) in narrating hadith. [See: Siyar A’lam An-Nubala’, 19/68]. In fact, the text of this hadith is cannot be found anywhere in other mu’tabar (accredited) books.

Besides, gifting prayer for the deceased had never been mentioned by the fuqaha’ in Fiqh books of madhhab Imam al-Shafi’e like al-Iqna’, Fath al-Mu’in, Syarah al-Muhaddab, Mughni al-Muhtaj, Minhaj Tolibin and etc.

Therefore, we are of the opinion that the hadith regarding gifting prayer is of unclear status according to shariah texts. This is because, the original rule of an act of worship is tawaqquf (stopped):

This is as mentioned in the hadith narrated by Aisha R.Anha where the Prophet PBUH said:

A person came to the Messenger of Allah (ﷺ) and said: My mother died suddenly without having made any will. I think she would have definitely given Sadaqa if she had been able to speak. Would she have a reward if I gave Sadaqa on her behalf? He (the Holy Prophet) said: Yes.

In conclusion, the rewards of deeds done by the living will be delivered to the deceased. Besides, pertaining to gifting sunnah prayer, we do not find it in any accredited books in our search, we do not find its origin. Hence, the hadith cannot be made as dalil for gifting sunnah prayer as every worship should be based on dalil. Besides, if one who is still alive intends to give the rewards of his every worship to the deceased like sadaqa, sanctioned prayer, make du’a and etc, then it is not a problem. Lastly, may this explanation enlighten us about this religion so that we will not commit something that forbidden. Amin.