IRSYAD AL-HADITH SERIES 463: THE MEANING OF THE SUPPLICATION ASKING FOR PROTECTION AGAINST CONTAGIOUS DISEASES (SERIES 1) 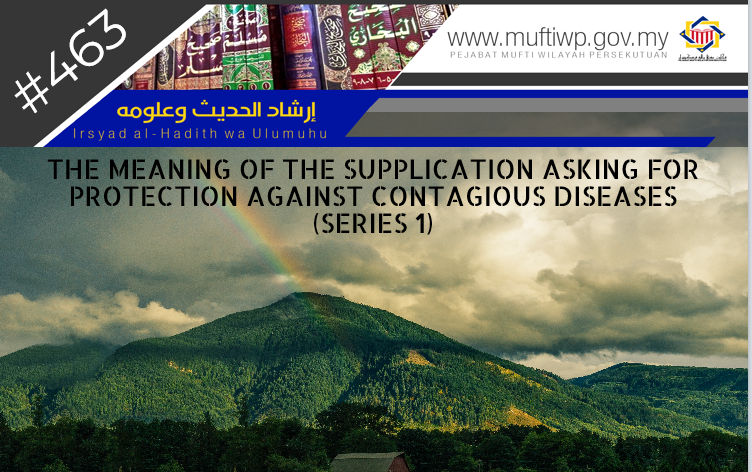 In the Name of Allah by whose Name nothing in the earth or the heaven is harmed. He is the All-Hearing, the All-Knowing.

As believers, we should always supplicate to Allah SWT for humans are created weak and always in need of their Creator in every situation and time. Thus, numerous supplications are taught to us by the Messenger PBUH for our daily lives. According to the above question, here, we include the source and summarized meaning of the supplication:

Source and Status of Hadith

“None of a slave who recites "In the name of Allah, when Whose name is mentioned nothing on Earth or in Heaven can cause harm, and He is the Hearer, the Knower" three times every morning and night will be harmed by anything.”

Imam al-Hafiz Ibn Hajar al-Asqalani evaluate this narration (Narration by al-Tirmizi and Ibn Majah) in his book as hasan sahih. [See: Nata’ij al-Afkar, 2/367]. Furthermore, Imam Ahmad also narrated the hadith in his Musnad (474) and Syiekh Syu’aib al-Arna’outh evaluate the sanad of the hadith as hasan when reviewing this hadith in Musnad Ahmad:

“Whoever recite it in the early morning and the beginning of the night: In the name of Allah who does not harm anything with His name in the heavens and earth. And He is the All-Hearing and the All-Knowing three times, surely will not be harmed by anything through the day and night.”

Hence, in our opinion, the hadith is hasan because in the sanad of the hadith, there is a narrator known as Abi al-Zinad whose name is Abd al-Rahman and the supplication is permissible to be recited in our daily lives asking to be protected from disaster, contagious diseases, hardship and others. Furthermore, we are permissible to supplicate with any type of supplication even if it is not stated in the Quran or sunnah as long as it does not contradict with the religion.

The Meaning of the Hadith

In the hadith, the advantages of those who recite this supplication at the break of dawn and the beginning of night. The supplication begins with the name of Allah and asking to be protected from any harmful matters in the name of Allah recited with the correct intention and sincerity. However, we are not only asking protection from the harms on earth but also from the heavens. Furthermore, Allah SWT is the All-Hearing and will hear our cries and Allah SWT is also the All-Knowing regarding each our situations. [See: Tuhfah al-Ahwazi, 9/234]

To conclude, supplication is not simply a request, but also a form of worship and sign that a slave is weak for in the dua they stated their khudhu’ (obedience), tazallul (humility) and iftiqar (need) towards Allah SWT. Lastly, may Allah SWT protect us from any bad things from the heavens and earth. Amin.