IRSYAD AL-HADITH SERIES 464: THE MEANING OF THE SUPPLICATION ASKING FOR PROTECTION AGAINST CONTAGIOUS DISEASES (SERIES 2) 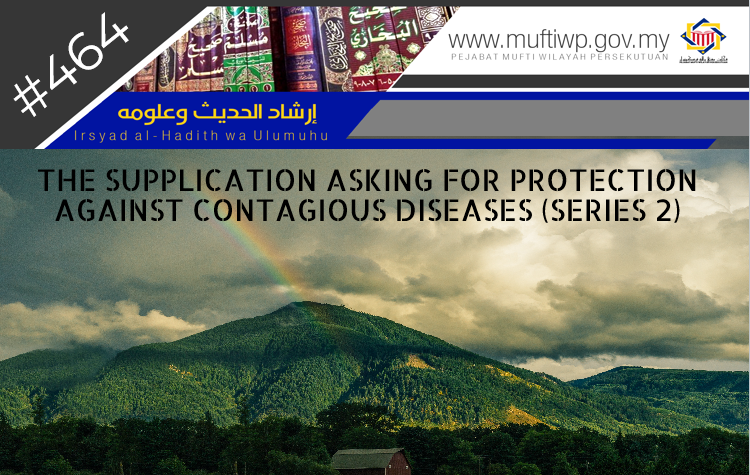 “I seek refuge with the complete words of Allah from the evil of what He has created,”

Supplication is a part of worship that is sanctioned by Allah SWT for His slaves. Thus, we as the slaves of Allah SWT are encouraged to always supplicate to him in every situation and time.

Source and Status of the hadith

According to the above question, the above supplication is narrated by imam Muslim in his Sahih. Furthermore, the hadith is also narrated by Imam al-Tirmizi and Imam Ibnu Majah which are as the following:

“When anyone lands at a place, and then says:" I seek refuge in the Perfect Word of Allah from the evil of what He has created," nothing would harm him until he marches from that stopping place.”

The Meaning of Hadith or Supplication

According to Imam al-Nawawi when he was commenting on the hadith, the meaning the Perfect Word of Allah when the perfection in it that is without any imperfection or defect. It is said the perfect word means words that is of benefit or healing or verses of the Quran. [See: al-Minhaj Syarah Sahih Muslim, 17/31]

This is also stated in the Quran, in Allah SWT statement asking us to supplicate using His names:

“And to Allah belong the best names, so invoke Him by them.”

To conclude, supplication is the weapon of believers. Thus, we are encouraged to always make dua to Allah SWT so that we will always be in His protection and care. Lastly, may Allah SWT protect us from any contagious diseases or bad things from happening to us. Amin.