IRSYAD AL-HADITH SERIES 465: THE MEANING OF THE SUPPLICATION ASKING FOR PROTECTION AGAINST CONTAGIOUS DISEASES (SERIES 3) 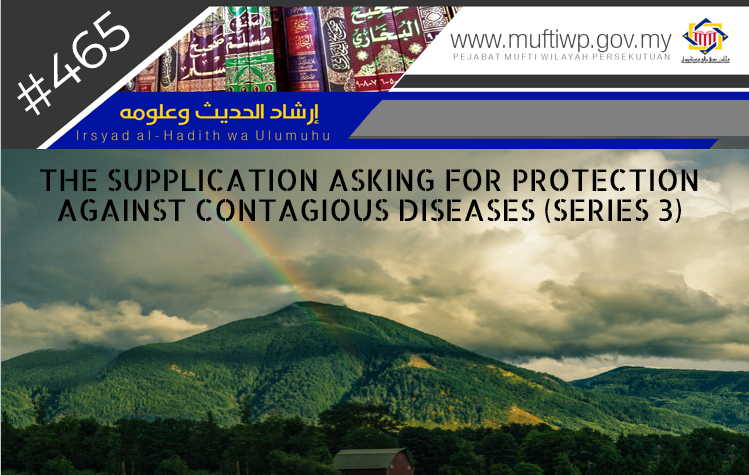 “O Allah, I seek refuge in You from possession, leprosy, leukederma and bad sickness (that may lead to visible deformity)”

Imam al-Khattabi said that we are encouraged to ask for protection against diseases that will cause permanent deformity or affect one’s mind and thoughts. These diseases are different from other diseases that do not have any permanent effects such as a fever, headache and others which serve as kaffarah of our sins (expunge of sins) and not as a punishment. [See: Ma’alim al-Sunan, 1/297]

Furthermore, mental instability or insanity is a disease which lead to loss of intellect (though process) where a person’s ability to think is the beginning of the goodness of knowledge that it is even stated as prioritized over knowledge itself. As for leprosy, it is a disease that blacken a person’s body, damaging the afflicted body parts, where it will rot and detaches from the body. Thus, we are commanded to ask for protection against anything that could impair our mental capacity such as loss of a person’s mind (insanity) and permanent defect on our body such as the disease of leprosy. Thus, at the end of the dua, a general request of protection from any harmful and evil diseases are stated. [See: al-Futuhat al-Rabbaniyyah, 7/217-218]

We once asked Syeikh Muhamad ‘Awwamah regarding the meaning of “evil diseases” in the hadith and he said any harmful or dangerous diseases such as the avian flu, cancer and others. Thus, corona virus which has become a pandemic right now is also included as one of the evil diseases mentioned the above hadith or supplication. [1]

To conclude, supplication is a special blessing given by Allah SWT for His slaves as a sign of remembrance of a slave towards his Creator. Hence, we are encouraged to always make dua to Allah SWT so that we will always be in His protection and care. Lastly, may Allah SWT protect us from any diseases or anything that are harmful for us. Amin.