IRSYAD AL-HADITH SERIES 468: WHO IS THE COMPANION OF THE PROPHET PBUH WHO IS THE LAST TO DIE? 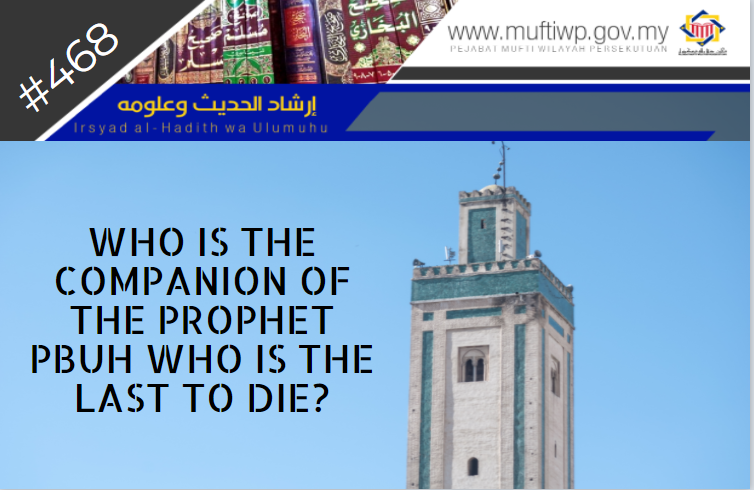 Assalamualaikum SS Datuk Mufti. My question is who is the last of the companions of the Prophet PBUH to die?

Moreover, Allah SWT blesses them and this is stated clearly in the Quran. Allah SWT states:

Al-Syaukani stated that Allah SWT accepted them and their obedience and worship that they performed with sincerity. And they are also content with the gifts and blessings of Allah SWT of which they never felt or thought of before. The acceptance of Allah SWT is the greatest status and the most honoured standing. (Refer Fath Al-Qadir Al-Jami Baina Fannai Al-Riwayah Wa Al-Dirayah Fi Ilm Al-Tafsir, 2/386)

"Do not abuse my companions for if any one of you spent gold equal to Uhud (in Allah's Cause) it would not be equal to a Mud or even a half Mud spent by one of them."

Imam al-Nawawi cited the opinion of al-Qadhi Iyadh where the Companions is more honoured than the people that come after them. The reason is they donated during hardship and adversity. All of them is basically helping, supporting and protecting the Prophet PBUH. (Refer Al-Minhaj Syarh Sohih Muslim, 8/92).

“Have you seen this night of yours? At the end of one hundred years after this none would survive on the surface of the earth (from amount my Companions). Ibn Umar said: People were (not understanding) these words of the Messenger of Allah (ﷺ) which had been uttered pertaining to one hundred years. Allah's Messenger (ﷺ) in fact meant (by these words) that on that day none from amongst those who had been living upon the earth (from amongst his Companions) would survive (after one hundred years) and that would be the end of this generation.”

Ibnu Umar understood that no Companion will live for more than a hundred years old. He also understood from the words of the Prophet PBUH that the generation of the Companions would end.

“There would be none amongst the created beings living on the earth (who would survive this century).”

Imam al-Nawawi said that what is meant by the Prophet PBUH is whoever present on that night of whom are among the Companions will not live for more than a hundred years. (Refer Al-Minhaj Syarh Sohih Muslim, 16/89).

Coming back to the question asked, the last companion of the Prophet PBUH who died was ‘Amir bin Wathilah al-Laithi. His nickname or moniker is Abu al-Tufail. He passed away in Mecca in the year 110 H. He was born during the war of Uhud. He had the opportunity to be with the Prophet PBUH for 8 years. (Refer Ma’rifah Al-Sahabat Li Abi Nu’aim Al-Asbahani, 6/3534).

Imam al-Zahabi stated that he is the last of the generation who has ever seen the Prophet PBUH. There is none after him who claimed to be a companion of the Prophet PBUH and this continued throughout the time of the tabi’in, tabi’ tabi’in and up to 500 years before a person confesses that he saw the Prophet PBUH and become a Companion in India. (Refer Siyar ‘Alam Al-Nubala, 3/468)

Ibn Abdul Barr stated that he is the last of the companion of the Prophet PBUH. Abu Tufail once said:

“There is none on this earth who has seen the Prophet PBUH except me.” (Refer Al-Isti’ab Fi Ma’rifah Al-Ashab, 4/1967)

He narrated hadiths from several companions of the Prophet PBUH. Among them are Abu Bakar Al-Siddiq, Umar Bin Al-Khattab, Muaz Bin Jabal, Ali and others. Furthermore, he is also referred to by the tabi’in such as Habib Bin Abi Thabit, Al-Zuhri, Abu Zubair Al-Makki, Ali Bin Zaid Bin Jad’an and others.

Imam al-Zahabi stated that he is a thiqah (trustworthy) person whose speech and actions are true, a knowledgeable person and a great poet. He is blessed with longevity and is together with Saidina Ali in numerous battles. (Refer Siyar ‘Alam Al-Nubala, 5/466-467).