IRSYAD AL-HADITH SERIES 469: THE MEANING OF ‘IFFAH OR AFAF’ IN THE PROPHET PBUH’S DU’A 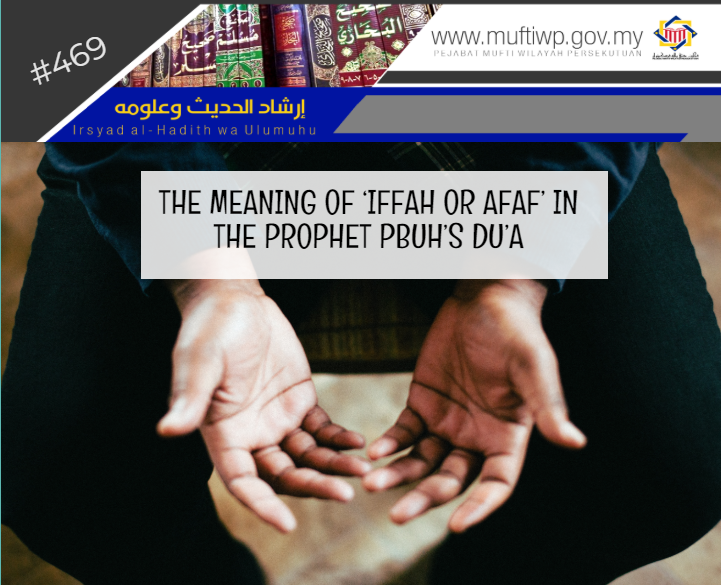 Assalamualaikum SS Dato’ Seri Mufti. What is the meaning of ‘iffah in a hadith which states that the Prophet PBUH supplicated for guidance, piety, ‘iffah and wealth?

We start by stating the hadith meant in the question. It is narrated by Ibn Mas’ud RA that the Prophet PBUH used to supplicate with a du’a:

"O Allah! I beseech You for guidance, piety, chastity and contentment."

The Meaning of Iffah (Chastity)

In the above hadith, among the things asked by the Prophet PBUH is the attribute of ‘iffah (chastity). It means abstaining oneself from any form of sinful acts and the prohibitions. Imam al-Nawawi explained: “Afaf (الْعَفَافَ) and ‘iffah (العِفَّة) mean distancing and abstaining oneself from prohibited actions.” (See al-Minhaj fi Syarh Sahih Muslim Ibn al-Hajjaj, 17/41). This is as stated by Ibn ‘Allan which states, “Al-‘Afaf (الْعَفَافَ) means protected from all sins and wrongdoings. (See Dalil al-Falihin, 7/275)

Among other meanings of ‘iffah (العِفَّة) is one is made sufficient of his provision as well as protected from prohibited actions. Mulla ‘Ali al-Qari in his commentary states: “Al-‘Afaf (الْعَفَافَ) means al-kafaf (الكَفَاف) (made sufficient of one’s provision). Some scholars state, its meaning is al-‘iffah (العِفَّة) (protected from the sins). Some scholars state, its meaning is one is protected from the prohibitions. It is cited from Abu al-Futuh al-Naisaburi, he said: “Al-‘Afaf (الْعَفَافَ) means the goodness of one’s soul and heart.” (See Mirqat al-Mafatih Syarh Misykat al-Masabih, 5/1721).

While when we carefully analyze the order of requests in the said du’a, it starts with asking for guidance, piety, then the attribute of ‘iffah (العِفَّة). Pertaining to this matter, Ibn ‘Allan explains: “Al-Huda (guidance) is made as the first as it is the base, and piety is built on top of it. While al-‘afaf (الْعَفَافَ) is linked with al-huda (الهُدَى) in a linkage between something specific with something general, to highlight the specific matter. This is because lust and desire has the tendency to call against al-‘afaaf (which is sins and evildoings). Then, one should ask for help from Allah SWT to leave them.” (See Dalil al-Falihin, 7/275)

Al-Iffah (العِفَّة) as stated by the scholars is being protected from sinful and prohibited acts as well as given the goodness of heart and soul.

Let us ask together for help from Allah SWT with the attribute of iffah (chastity). We close this with the du’a:

"O Allah! I beseech You for guidance, piety, chastity and contentment."