IRSYAD AL-HADITH SERIES 471: WHO WAS THE LAST UMM AL-MU’MININ TO PASS AWAY? 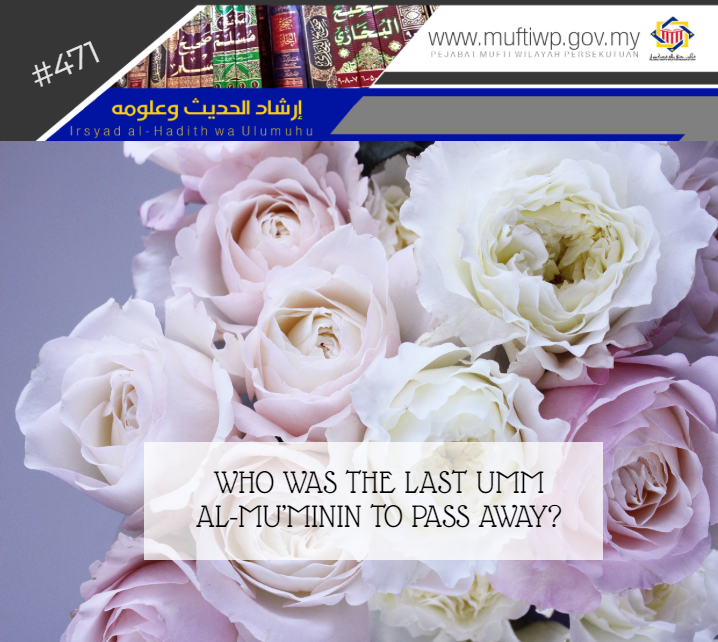 Assalamualaikum Datuk Mufti. Hope you are in the best of health. My question is who was the last umm al-mu’minin to pass away?

The Prophet PBUH’s wives are virtuous women of whom their positions are honoured by Allah SWT over any other women. Their virtues and specialities are mentioned by Allah SWT in the Quran:

O wives of the Prophet, you are not like anyone among women. If you fear Allah,

Syeikh Mustafa al-Maraghi states that even if there are many women, they will never be the same as the wives of the Prophet PBUH in terms of their glory and virtue. (Refer Tafsir Al-Maraghi, 22/5).

The wives of the Prophet PBUH are even named as the ummahatul mu’minin which means the mothers of the believers as a recognition of their high position and glory. Allah SWT says:

The Prophet is more worthy of the believers than themselves, and his wives are [in the position of] their mothers

Al-Baidhawi stated that the Prophet PBUH is prioritized in every matter. He never commanded something except there is some good behind his commandment and for their success in which it contradicts with one’s desire. Hence, it is wajib to love the Prophet PBUH more than a person loving himself and hasten to follow the Prophet PBUH’s commandment. The same goes for the wives of the Prophet PBUH who are also the mothers of the mu’min. This indicates their high position in which these women may not be married to anyone and should be honoured. (Refer Anwar Al-Tanzil  Wa Asrar Al-Ta’wil ; Tafsir Al-Baidhawi, 5/5).

Hence, as a believer, it is totally forbidden for us to insult, defame, disrespect or degrade any of them. The action of degrading and disrespecting the wives of the Prophet PBUH is the actions of the fasiq.

“Whoever insults Abu Bakar should be caned. Whoever insult ‘Aisha should be killed.” He was asked: For what? He answered: “If someone accuses ‘Aisha of committing adultery, then he had committed something which is a contradiction with al-Quran”. (Refer Al-Sorim Al-Maslul ‘Ala Syatim Al-Rasul, pg 440).

If accusing ‘Aisha is already considered as going against al-Quran, surely, the actions of degrading and defaming the rest of the Prophet PBUH’s wives are the same.

There are eleven wives of the Prophet PBUH. They are:

They not only are the wives of the Prophet PBUH, but they also help in the spread of Islam. In fact, among them are the فقهاء الصحابيات which means the female jurists (faqih) that are referred to by the Companions. Their perseverance and expertise, as well as their spirit in spreading the knowledge and da’wah, are examples for future generations.

Her full name is Hind bint Abi Umayyah bin al-Mughirah bin Abdullah bin Umar bin Makhzum bin Yaqazah bin Murrah al-Makhzumiah. She is the cousin of Khalid al-Walid also Abu Jahal. She is among those who precede in answering the call of hijrah. Before marrying the Prophet PBUH, she had a husband named Abu Salamah whose full name is Abdullah bin Abdul Asad bin Hilal al-Makhzumi. Abu Salamah is also one of the Companions.

Umar, the son of Umm Salamah once told the story of the passing away of his father; Abu Salamah. He said:

Meaning: “Rasulullah PBUH sent my father to Abi Qatn (to a sariyah; a minor war without the presence of the Prophet PBUH) on Muharram of the 4th hijrah. He went there for 29 days, then returned on Safar. The wounds he got from the war of Uhud became worse which then causing his death. It happened on the 22nd Jamadil Akhir. My mother ended her ‘iddah on Shawal and the Prophet PBUH married her on the same month.” (Refer Al-Tabaqat Al-Kubra, 8/87).

In another narration, it mentions the conversation between Umm Salamah and Abu Salamah. Ibn Sa’ad said: Ahmad bin Ishak al-Hadrami told us that Abdul Wahid bin Ziyad told us that ‘Asim al-Ahwal told us from Ziyad bin Abi Maryam that Umm Salamah once said to her husband; Abu Salamah:

Meaning: “A story came to us that any woman who lost her husband while her husband is among the people of Paradise, then his wife did not remarry with anyone after that, then Allah will gather them both in the Paradise. Here, I would like to make a promise to you that you will never get married after my death and I will not remarry after your death.

Abu Salamah said: Do you obey me?

Abu Salamah said: If I die, then marry another man. O Allah, bless Umm Salamah a better man after my death. The one who may not cause Umm Salamah to be sad and will not hurt her.

When Abu Salamah passed away, Umm Salamah said: Is there a man better than Abu Salamah? Then, in a period of time, the Prophet PBUH came and voiced out his intention to ask for her hand to her son or his nephew. Umm Salamah said: Should I reject him or prioritize him over my family? Then, the Prophet PBUH came again the next day and asked for her hand in marriage.” (Refer Al-Tabaqat Al-Kubra, 8/88).

She is a fuqaha’ among the Companions. She herself also heard from the Prophet PBUH in hadith. The total numbers of hadith she heard from the Prophet PBUH are 378. (Refer Siyar ‘Alam Al-Nubala, 2/210). Not only that, she was also referred to by the Tabi’in. Among those who narrate and hear hadith from her are Sa’id bin Musayyib, Syaqiq bin Salamah, al-Aswad bin Yazid, Mujahid, Nafi’ bin Jubair bin Mut’im, Nafi’ Mawla ibn Umar, ‘Ata’ bin Abi Rabah, Ibn Abi Mulaikah and others. (Refer Siyar ‘Alam Al-Nubala, 2/202).

She had three children who are also the companions of the Prophet PBUH which are Salamah, Umar and Zainab. She lived long until she heard the news of the killing of Sayyidina Husain. The news silence her and she does not speak as well because it made her extremely sad. (Refer Siyar ‘Alam Al-Nubala, 2/202).

She passed away on the 62 Hijrah. On that time, she was 90 years old. Her body was prayed by Sa’ad bin Zaid. Some said that it was Abu Hurairah who lead the prayer. Her body was buried at the Baqi’. (Refer Ma’rifah Al-Sahabah, 6/3218). May Allah always bless our mother, Umm Salamah.

May we always love ahl bayt of the Prophet PBUH and strive to follow their path. Wallahua’lam.