IRSYAD AL-HADITH SERIES 476: HADITH ON THE BETRAYAL OF HAWWA’ (EVE) 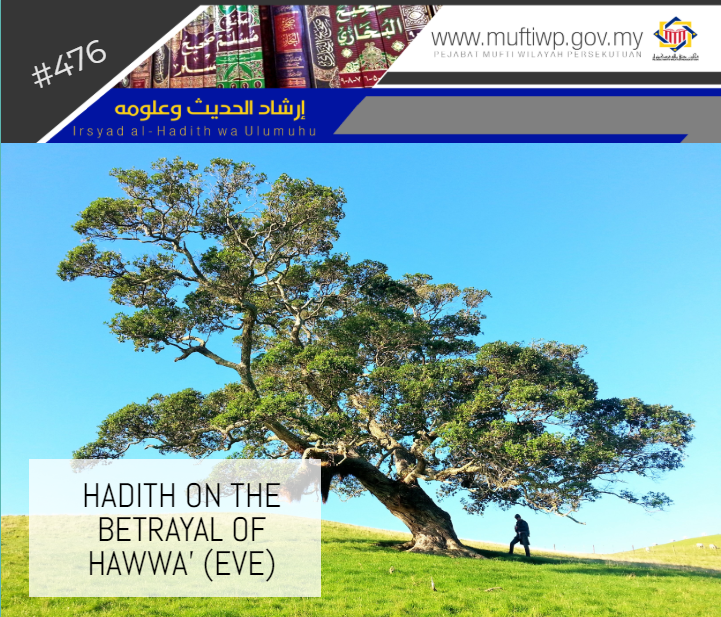 “And were it not for Eve, no woman would ever betray her husband.”

The above hadith is sahih as narrated by the syaikhain (two sheikhs) which are Imam al-Bukhari and Muslim in their Sahih.

“And were it not for Eve, no woman would ever betray her husband.”

“Had it not been for Eve, a woman would have never acted unfaithfully towards her husband.”

Imam Badr al-Din al-‘Aini stated in his book on the betrayal of Hawwa’ when she persuaded Adam AS to eat the fruit from one of the trees (in Paradise). [See: Umdah al-Qari, 15/211]. While al-Hafiz Imam Ibn Hajar al-Asqalani stated the meaning of betrayal in this hadith is she (Hawwa’) was deceived by the Iblis, then she persuaded Adam AS. Therefore, Hawwa’ who is the mother of all women and those who are the most similar to her in term of giving birth, makes it so that not a single woman is free from deceiving her husband by her sayings or actions. Besides, betrayal here does not mean she (Hawwa’) had committed a grave sin, it is far from true. However, when Hawwa’ obeyed her desire to eat from the tree and persuaded Adam AS, this is considered as deceiving him (Adam AS). [See: Fath al-Bari, 6/368]

In the Quran, this story is stated as the following:

But Satan whispered to them to make apparent to them that which was concealed from them of their private parts. He said, "Your Lord did not forbid you this tree except that you become angels or become of the immortal."

To understand this issue, the hadith does not indicate that Hawwa’ is an unfaithful wife as she deceived Adam AS, but the betrayal here is of Hawwa’ failing to fulfil her duty in advising Adam AS to not get close or eat from the tree. It is stated by:

“Whereas the betrayal of Hawwa’ upon her husband is because she (Hawwa’) failed in advising regarding the tree and not due to any other reason.” [See Kasyf al-Musykil, 3/504]

“Betrayal of Hawwa’ towards Adam is because she (Hawwa’) neglects giving advice to him (Adam AS) related to the tree and not due any other reason.” [See: Jami’ al-Usul, 10/325]

Besides, this hadith may be understood by the hadith of creation of Hawwa’ from the ribs of Adam AS which we wrote in the past series. Imam al-Nawawi said when commenting on the hadith on the creation of Hawwa’ is it is commanded (for men or husbands) to always be kind and gentle towards women as well as having patience for their bent attitude and weakness in intellect. Besides, it is cursed to divorce them without reasons while her husband has no initiative to correct her (the wife). [See: al-Minhaj, 10:57]

This matter also may be answered through the saying of Allah SWT which proves that Satan not only persuaded Hawwa’, but Adam AS also. Therefore, the wrongdoing not only befalls on Hawwa’, but also on Adam AS.

Then Satan whispered to him; he said, "O Adam, shall I direct you to the tree of eternity and possession that will not deteriorate?"

In conclusion, the above hadith is sahih, but it does not indicate that Hawwa’ betrayed Adam AS. It was due to Hawwa’s failure to advise Adam AS in the matter when he was persuaded by Satan. Besides, this also indicates the importance of the roles of husband and wife in living their life. May this brief explanation give benefit us and give us understanding in this religion as well as being blessed with good a good wife and happy family here in the dunya and the hereafter. Amin.