IRSYAD AL-HADITH SERIES 477: THE MEANING OF TASHIF IN THE SCIENCE OF HADITH 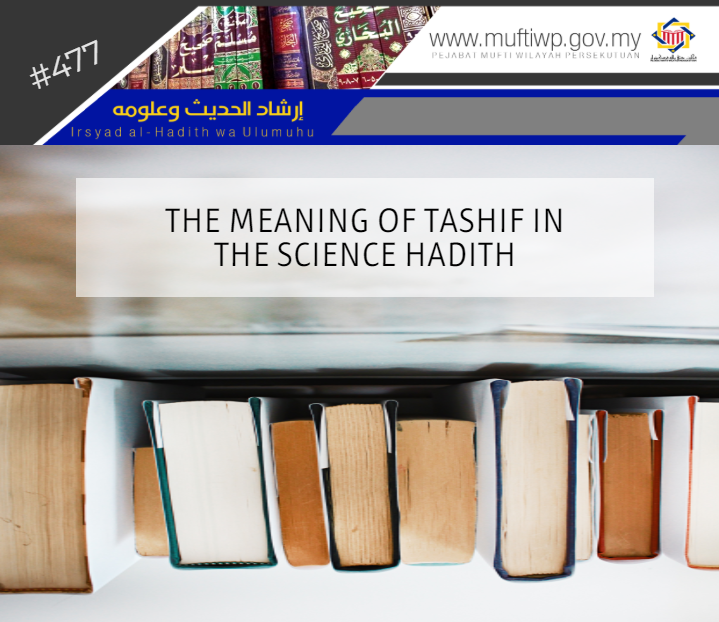 What is meant by tashif in the science of hadith?

The question is related to the science of mustholah hadith or named as ‘ulum al-Hadith. Tashif is a type or part of hadith related to sanad of a hadith whether it is connected or not. This way, the scholars will decide on the ruling whether the hadith is to be accepted or rejected.

Tashif is a change that takes place on the alphabets (either in sanad or matn) like a mistake in the change among the alphabets or the dots. This is the definition given by Dr Mustafa al-Bugha in his book. [See: Buhuth fi ‘Ulum al-Hadith wa Nususuhu, 180]

Among the examples of tashif is mentioned by Dr Nuruddin ‘Itr in what is narrated by Abdullah bin Lahi’ah from the writing of Musa bin ‘Uqbah to him from the chain of narration of Zaid bin Thabit RA:

There is a tashif in the text of this hadith where Ibn Lahi’ah had mistakenly narrated this hadith from the writing of Musa bin ‘Uqbah as he only took the hadith from the book, and not through listening to it. [See: Lamhat Mujazah fi Usul ‘Ilal al-Hadith, 68]. Tashif meant in the text of this hadith is Ibn Lahi’ah had mistakenly change one alphabet at the end of the word “احْتَجَم”. The correct narration is as narrated by Imam al-Bukhari, Muslim and others that:

Looking at both of the texts, it clearly states that Ibn Lahi’ah has done a tashif where there is a mistake at the last alphabet where there is a conversion between the alphabet mim and ra’. This matter is also verified by al-Hafiz Imam Ibn Hajar al-Asqalani (852h) that it is undeniably a tashif. [See: al-Itraf, 2/384]. The sahih narration is as narrated by the narration of al-Bukhari and Muslim by the phrase “احتجر”. This causes a change in the real meaning of the hadith.

In conclusion, normally, tashif happens when there is a lack of dhabt (ضبط) from the narrator in which one who has good and perfect memorization, free from mistakes, as well as able to recall what he memorized anytime he wants when narrating a hadith. Besides, this attitude of dhabt is essential as it is one of the conditions of a sahih hadith. This attitude of dhabt consists of two types which are dhabt shodri (memorization) and dhabt kitabi (writing). May this brief explanation able to give some benefits and elevate our understanding in the science of hadith, then we may be able to preserve the Prophet PBUH’s sayings from any falsehood committed under his name. Amin.