IRSYAD AL-HADITH SERIES 481: THREE GIFTS THAT ONE SHOULD NOT REFUSE 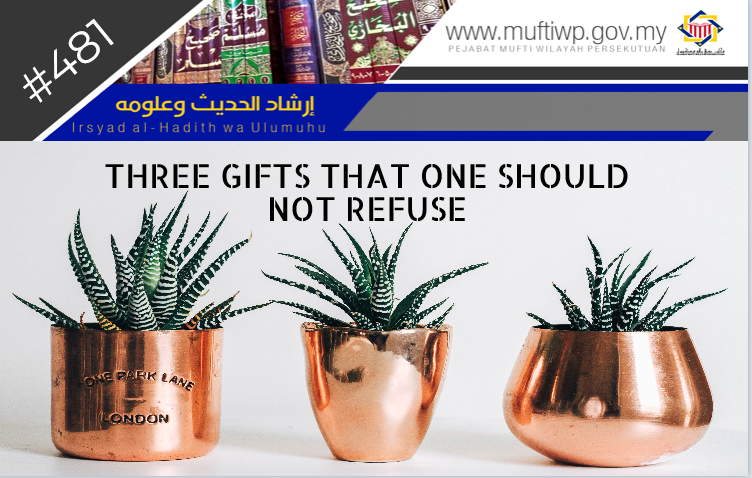 I have a question to ask. Is there a hadith which states ‘three gifts that should not be refused are pillow to sit on, milk to drink and oil’? If this hadith exists, what is its status and can you explain about it? Thank you.

Among the attributes of a Muslim is being careful when citing anything to be from the Prophet PBUH. This is in accordance with the principle explained by Allah SWT in the Quran. Allah SWT states:

“O you who have believed, if there comes to you a disobedient one with information, investigate, lest you harm a people out of ignorance and become, over what you have done, regretful.”

Syeikh Mustafa al-Maraghi in his commentary said when a person receives any news, he should stop himself from believing in it immediately but first verify by asking for proof or evidence so that the truth about the news is known. Whoever ignores to verify from a disobedient, then he is in truth does not care whether it is a lie or deception. (Refer Tafsir Al-Maraghi, 26/127)

The attitude to first verify or analyse what is heard is necessary in every Muslim especially when it is related to the hadiths of the Prophet PBUH. This is to avoid from hearing hadiths which are not sabit from the Prophet PBUH.

Coming back to the question presented, the original matn (text) for the hadith stated by the questioner are as the following:

"There are three that are not refused: Cushions, oils [Duhn (fragrance)], and milk."

The hadith is narrated by Abdullah bin Umar through various chains of narration. We cite the full hadith including the sanad as stated in accredited hadith books.

“Qutaibah told us. He said: Ibn Abu Fudaik narrates to us from Abdullah bin Muslim from his father Ibnu Umar. He said that the Messenger of Allah (ﷺ) said: "There are three that are not refused: Cushions, oils [Duhn (fragrance)], and milk."

All the sanad is focused towards Ibnu Abu Fudaik. His real name is Muhammad Bin Ismail bin Abi Fudaik Al-Madani. Imam Al-Zahabi said he is a saduq and a famous narrator of which the hadiths that he narrated are written in al-Kutub al-Sittah. Most scholars said he is thiqah (trustworthy). (Refer Mizan Al-‘Itidal Fi Naqd Al-Rijal, 4/483). Yahya bin Ma’in said Ibn Abu Fudaik is a thiqah narrator. (Refer l-Jarh Wa Al-Ta’dil Li Ibn Abi Hatim, 7/189). He passed away in the year 200 H.

According to the above discussions, we are inclined to state that the hadith is hasan.

Muhammad Abdurrahman al-Mubarakfuri said that these three things a person should not refuse if offered. The reason is the gifts are of low value that it would not lead to the giver feeling arrogant or proud and also do not harm the receiver. He cited the opinion of al-Tibi on this hadith. Al-Tibi said, when the host offers these gifts it is a form of him honouring his guests. Thus, it should not be refused if offered. Although it is a simple gift, it is beneficial. (Refer Tuhfah Al-Ahwazi Syarh Jami’ Al-Tirmizi, 8/74). It is also an acknowledgement towards the host.

“The Prophet (ﷺ) never used to refuse (a gift of) scent.”

This action of the Prophet PBUH is followed by Anas until it became his habit. Ibnu Battal said the Prophet PBUH never refuses it for it is the practise of the angels when remembering Allah SWT.

Simply put, the hadith means that if we are offered a good gift, then we should not refuse it.

To conclude, the status of the hadith is hasan. This is stated by Ibnu Hajar al-Asqalani and some other hadith scholars. The meaning of it is these gifts are offered when a person came to visit and he is offered these gifts, then these gifts should not be refused for it is a form of the host honouring his guests.

May Allah SWT give understanding to us all. Wallahua’lam.