IRSYAD AL-HADITH SERIES 485: THE ADDITION OF THE COMMANDMENT TO PRAY AT HOME IN THE ADHAN 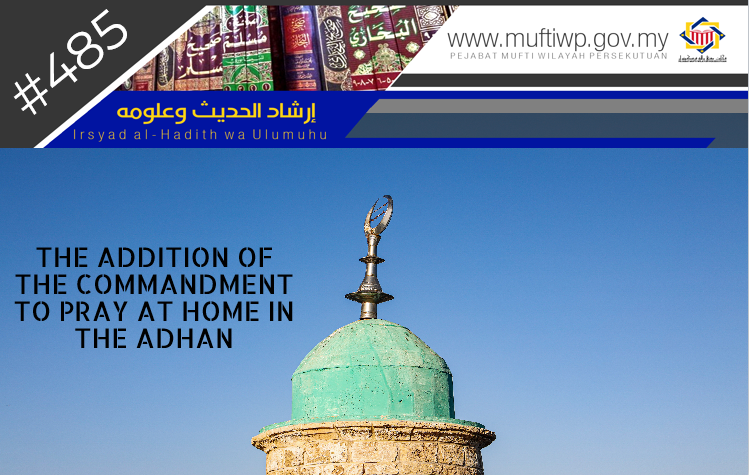 According to the above question, the addition of the commandment to pray at home in the adhan is thabit in a sahih hadith according to the narration of Imam al-Bukhari and Muslim in their books. Furthermore, this incident happened during the time of the Prophet PBUH as stated in several narrations:

Furthermore, it is also narrated by Imam Ahmad and Abu Daud in their books:

“The rain was falling on the day when the Battle of Hunayn took place. The Prophet (ﷺ), therefore, commanded that the people should offer their prayer in their camps.”

There are several other narrations which state the commandment of the Prophet PBUH for the muezzin to call the adhan adding the commandment asking people to pray at their homes. Furthermore, there is a choice of when the commandment of “pray at your homes” should be called, whether it is in the adhan itself or after the adhan as stated by scholars. (See al-Masail al-Muhimmah fi al-Azan wa al-Iqamah, 96). The reason is there are several narrations which mentioned that the addition is stated in various places. Among them are:

The caller of the Messenger of Allah (ﷺ) on a rainy night during a journey saying: 'Hayya 'ala as-salah, Hayya 'ala al-falah, sallu fi rihalikum (Come to prayer, come to prosperity, pray in your dwellings).'"

Once on a rainy muddy day, Ibn `Abbas delivered a sermon in our presence and when the Mu'adhdhin pronounced the Adhan and said, "Haiyi `ala-s-sala(t) (come for the prayer)" Ibn `Abbas ordered him to say 'Pray at your homes.'

In al-Mawsu’ah al-Fiqhiyyah al-Kuwaitiyyah, it is stated that it is permissible for a muezzin to call “pray at your homes” in really heavy rain, thunderstorms and extreme cold situations after the adhan. (See al-Mawsu’ah al-Fiqhiyyah al-Kuwaitiyyah, 2/362). While in Raudhah al-Tholibin by Imam al-Nawawi, it is stated that it is sunnah for the muezzin to call “pray in your homes” after the adhan and if he wants to call it during the adhan, then he should call it after al-Haila’ah (hayya ‘ala al-Solah or hayya ‘ala a-Falah) and this is not an issue. (See Raudhah al-Tholibin, 1/208)

Among the phrases for the additions stated above are:

“Pray in your dwellings,”

“Pray in your homes,”

To conclude, the incident where it is called for people to perform their prayers at home happened during the time of the Prophet PBUH himself, when there is certain difficulty that prevented or endangered them from going to the mosque according to the above-stated narrations. Furthermore, the muezzin has a choice of whether to call it after or during the adhan. Lastly, may Allah SWT protect us all from this dangerous COVID-19 pandemic and make us from His slaves who always perform the prayer in any situations. Amin.