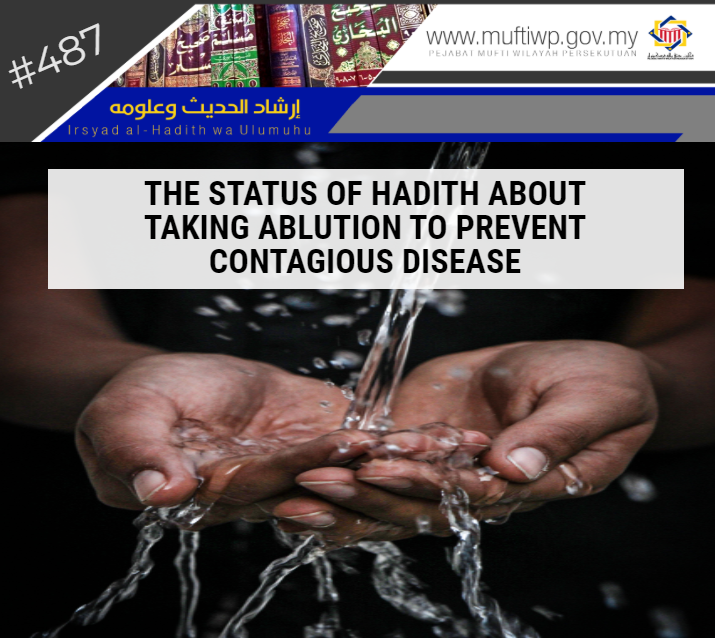 Assalamualaikum ustaz. I would like to ask about the status of the hadith which has been widely shared since the outbreak of Covid-19 which states: “In the end of times, there will come a spread of contagious disease in the world. Only my ummah will be saved as they observe their wudu’” – Narrated by al-Thabrani. My question is, is this hadith sahih?

First, there are syara’ evidences which state there will be outbreaks of contagious disease upon later generations of this ummah. Among them is what is stated in a hadith narrated by Ibn Umar R.Anhuma. He stated that the Prophet PBUH said:

“Immorality never appears among a people to such an extent that they commit it openly, but plagues and diseases that were never known among the predecessors will spread among them,”

Here we state some opinions of the scholars on the status of the above hadith:

Coming back to the question asked, after doing thorough research on the text of hadith in the hadith books by Imam al-Thabrani like al-Mu’jam al-Saghir, al-Mu’jam al-Awsath and al-Mu’jam al-Kabir, we did not find any hadith which is close or exactly the same as the text of the hadith.

Hence, we state here that there is no sahih and sarih (clear/direct) hadith that indicates that taking ablution may prevent contagious disease to those who observe it. This is because, according to the sahih hadith, when a disease or calamity from Allah befalls a nation, it will also fall on the pious and believers among them. It is mentioned in a hadith narrated by Ummu Salamah R.Anha where she said that the Prophet PBUH said:

This hadith clearly states that if Allah SWT’s torment befalls a nation, then it will encompass all of them whether there are pious people among them or not. In fact, this is strengthened by a hadith narrated by Ibn Umar RA, where he said that the Prophet PBUH said:

“When Allah intends to chastise a people, He chastises all of them then they would be raised according to their deeds.”

Syeikh Muhammad al-Amin al-Hariri al-Shafi’e in his commentary upon this hadith said: “(Torment) will encompass all among the people of a nation; among the pious and the sinners.” Refer Al-Kaukab al-Wahhaj Syarah Sahih Muslim (26/58).

The same is stated by Syeikh Abu al-Abbas Ahmad bin Umar al-Qurthubi which states: “Allah will destroy all of them with His torment which He sent to all people including the pious and the sinners among them. While the torment that falls on the pious is to elevate their rank as well as adding to their rewards that he will be resurrected with his good intention”. Refer Al-Mufhim (7/144).

It is also strengthened by a hadith narrated by Zainab bint Jahsy R.Anha where she said:

Allah's Messenger, would we be perished in spite of the fact that there would be good people amongst us? Thereupon he said: “Of course, but only when the evil predominates.”

In conclusion, we summarize this statement into several following points:

Lastly, we pray to Allah SWT to be blessed with the correct understanding in this religion. Amin.