IRSYAD AL-HADITH SERIES 497: AL-QURAN WILL MATERIALIZE IN THE FORM OF A MAN ON THE DAY OF JUDGEMENT. IS AL-QURAN A MAKHLUQ (CREATION)? 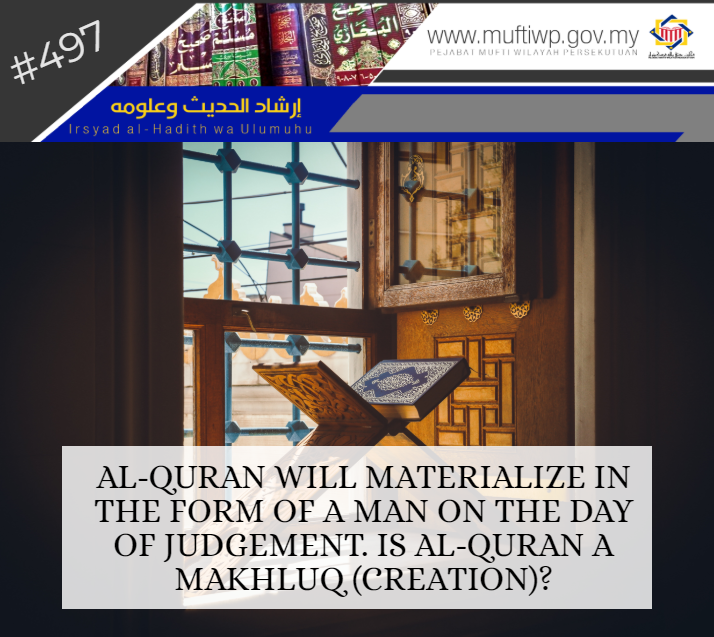 Assalamualaikum ustaz. May you be in the best of health. I have a question to ask. I once heard in a religious lecture that al-Quran will appear in the form of a man on the Day of Judgement to give syafa’ah towards those who always recite it. Is this hadith sahih? And does it mean al-Quran is a makhluq because it comes in the form of a man? Hope for an explanation from ustaz.

Al-Quran is kalamullah (sayings of Allah) which is a miracle. Whoever recites it will be rewarded as mentioned by the Prophet PBUH:

On top of that, al-Quran is a book of guidance which guide humans until the Day of Judgement. Allah SWT says:

This is the Book about which there is no doubt, a guidance for those conscious of Allah –

Sheikh Mustafa al-Maraghi stated that al-Quran contains guidance which guide to the truth. It leads them to happiness in this world and hereafter. (Refer Tafsir Al-Maraghi, 1/39)

This means that it is not merely a revelation, but the purpose of its revelation is as guidance for humans to live their life in this world according to what Allah has set and they will acquire happiness in the hereafter.

Coming back to the question presented, this hadith is narrated in several accredited books of hadith. Among them is the narration from Imam Ahmad in his Musnad (22976), Ibn Majah in his Sunan (3781) and it is also mentioned by al-Tabarani in al-Mu’jam al-Awsat (5764). The text of the hadith is as the following:

“Al-Quran appears on the Day of Judgement in the form of a man whose body is yellowish, then he said: I am the one who awakens you at night and makes you thirsty during your days.”

The sanad of this hadith meets in Waki’ bin al-Jarrah from Basyir bin Muhajir from Abdullah bin Buraidah from his father Buraidah bin Husaib. All of these narrators are thiqah (trustworthy) except through the narration of al-Tabarani in al-Mu’jam al-Awsat which contains a narrator named Yahya bin Abdul Aziz al-Hammani. He is a weak (dhoif) narrator. (Majma’ Al-Zawaid Wa Manba’ Al-Fawaid, 7/73).

Basically, there are numbers of other hadith which state that al-Quran appears on the Day of Judgement in many forms. Among them is what is narrated by Imam Muslim from Abu Umamah al-Bahili that the Prophet PBUH said:

Recite the Qur'an, for on the Day of Resurrection it will come as an intercessor for those who recite It. Recite the two bright ones, al-Baqara and Surah Al 'Imran, for on the Day of Resurrection they will come as two clouds or two shades, or two flocks of birds in ranks, pleading for those who recite them. Recite Surah al-Baqara, for to take recourse to it is a blessing and to give it up is a cause of grief, and the magicians cannot confront it. (Mu'awiya said: It has been conveyed to me that here Batala means magicians.)

The same in other hadith which states:

And there are numerous other hadiths like the above hadiths. However, if al-Quran appears in the form of a man, a bird and the like, does it mean that al-Quran is makhluq? Of course, it is not. The scholars explained what is mentioned by the Prophet PBUH. Among them is what is mentioned by Imam al-Nawawi. He said:

“What is meant by the hadith is the rewards from the recitation of al-Quran appear in the form of clouds and etc.” (Refer Al-Minhaj Syarh Sahih Muslim, 6/90).

Imam Abdul Rauf al-Munawi explained that what appears as mentioned in the hadith is rewards for those who recite and practice it. (Refer Faidh Al-Qadir Fi Syarh Al-Jami’ Al-Saghir, 2/81)

Al-Quran is Kalamullah al-Qadim. It is not a makhluq as believed by the Mu’tazilites. Refer our article of Bayan Linnas series 139. [1]

In conclusion, hadith which mentions that al-Quran will appear on the Day of Judgement in the form of a man is hassan hadith. What is meant by the hadith is not al-Quran itself will come in the form of a man. This will lead to the understanding that al-Quran is a makhluq. However, what is meant is the rewards due to reciting and practicing the Quran. The rewards later will appear in the hereafter in many forms to give syafa’ah and protection to those who are rightful of it.

May we always be with al-Quran and become those who always recite and practice it. Wallahua’lam.