IRSYAD AL-HADITH SERIES 500: EGYPT IS ALLAH’S ARROW IN THIS WORLD 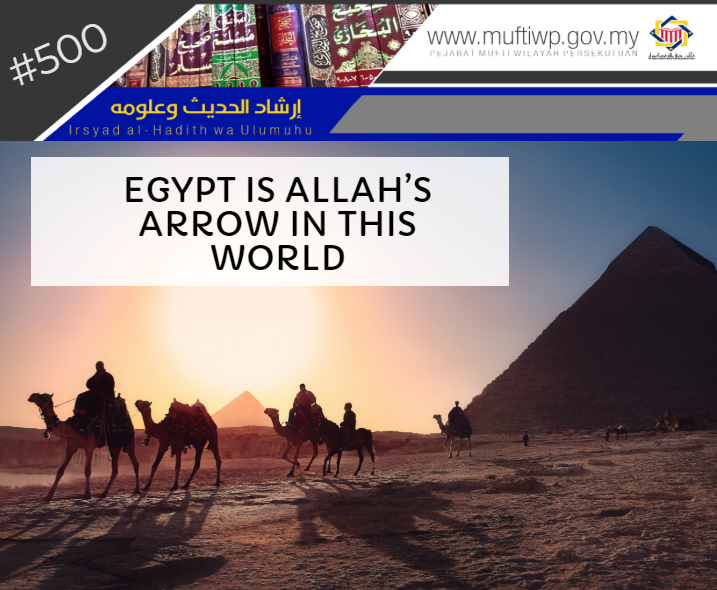 Assalamualaikum ustaz. I would like to ask on the status of a hadith that I once heard from someone. The hadith states ‘Egypt is Allah’s arrow in this world. Enemies who enter will be shattered to pieces by Allah’. I heard that due to this hadith, Egypt is named as kinanah. Hope for an explanation from ustaz.

As we all know, everything related to the Prophet PBUH should be clarified and made sure of its authenticity first. This is to avoid falsehood in the name of the Prophet PBUH as his saying:

"Whoever tells a lie against me (intentionally) then (surely) let him occupy, his seat in Hellfire.”

These are the reminders from the Prophet PBUH to those who try to create and manipulate his sayings to the extent that they create falsehood in the name of the Prophet PBUH.

Coming back to the question presented, the original matn (text) of the hadith is as the following:

"Egypt is the 'quiver' of Allah in this world of Him. No enemy asks for it unless Allah SWT will shatter them to pieces."

After we analyse this matn, we find out that most scholars said that the mentioned hadith is fake.

Imam al-Suyuti said on that hadith:

“I do not find (the origin of the hadith), in fact, it refers to the land of Sham as narrated by Ibn al-Hassan Ali bin Muhammad bin Syuja’ al-Rib’I in the book Fadhail al-Sham (the advantages of the land of Sham) from the chain of narration from al-Mas’udi from ‘Aun from Abdullah bin ‘Utbah, he said that Allah reveal (revelation) to some of the Prophet PBUH that Allah SWT said: ‘Sham is My kinanah (quiver). If I become angry towards a nation, I shall throw arrows from the quiver.” (Refer Al-Laali Al-Manthurah Fi Al-Ahadith Al-Masyhurah, 1/58).

“I do not see any hadith as such on the advantage of Egypt.” (Refer Maqasid Al-Hasanah Fi Al-Ahadith Al-Musytaharah ’Ala Al-Alsinah, 1/6090)

“The words are fake even if the meaning is sahih to us.” (Refer Al-Asrar Al-Marfuah Fi Al-Akhbar Al-Maudhu’ah, 1/317).

This means even if its meaning is accurate, but it is undeniable that its words are fake and it is a great crime to relate it to the Prophet PBUH. In fact, the hadith is not cited in any accredited books of hadith. This highlights more of its fabrication.

However, it is undeniable that Egypt has its advantage and this country is mentioned by the Prophet PBUH in hadiths which are sahih. Among them is what is narrated by Abu Zar RA where the Prophet PBUH said:

You would soon conquer Egypt and that is a land which is known (as the land of al-qirat). So when you conquer it, treat its inhabitants well

In conclusion, the words of the hadith mentioned are fake and cannot be related to the Prophet PBUH. May Allah protect our tongue and hand from committing falsehood in the name of the Prophet PBUH. Wallahua’lam.