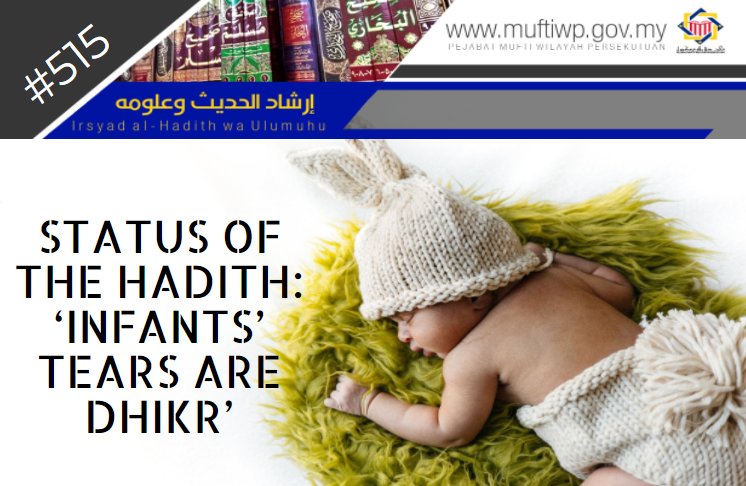 Is it sahih the hadith which states that infants’ tears are dhikr?

Narration which states that infants’ tears are dhikr is fake/fabricated. This hadith may not be spread and referred as the Prophet PBUH’s saying. So, we as Muslims are advised to always be cautious in spreading any text of hadith or news without first analyzing its authenticity.

Based on analyzation towards accredited books of hadith, there is no accepted (maqbul) narration on that infants’ tears are dhikr. However, the narration is stated in books which gather fabricated/fake narration. Here is the text for that narration which is referred to Ibn ‘Umar RA that the Prophet PBUH said:

Do not smack your children when they cry because tears of four-month infants are them saying syahada. The second four months of their birth are them praising the Prophet PBUH. Then, on the next four months, the infants will pray (for goodness) for both their parents.

Al-Khatib al-Baghdadi stated this narration as highly munkar. This is because, there is a problematic narrator in the sanad like Abu al-Hasan ‘Ali Ibn Ibrahim Ibn al-Haytham. (Tārikh Baghdād, 13: 246)

Based on the above explanation, it can be concluded that the hadith ‘infants’ tears are dhikr’ is a fabricated hadith and of no origin. Spreading and referring it to the Prophet PBUH is sinful and haram. Therefore, each Muslim individuals shall be more cautious and take measures like tabayyun (verification) upon receiving any news from any channel whatsoever before being spread. May Allah SWT preserve our hands and tongue from saying and spreading news which are hoax.