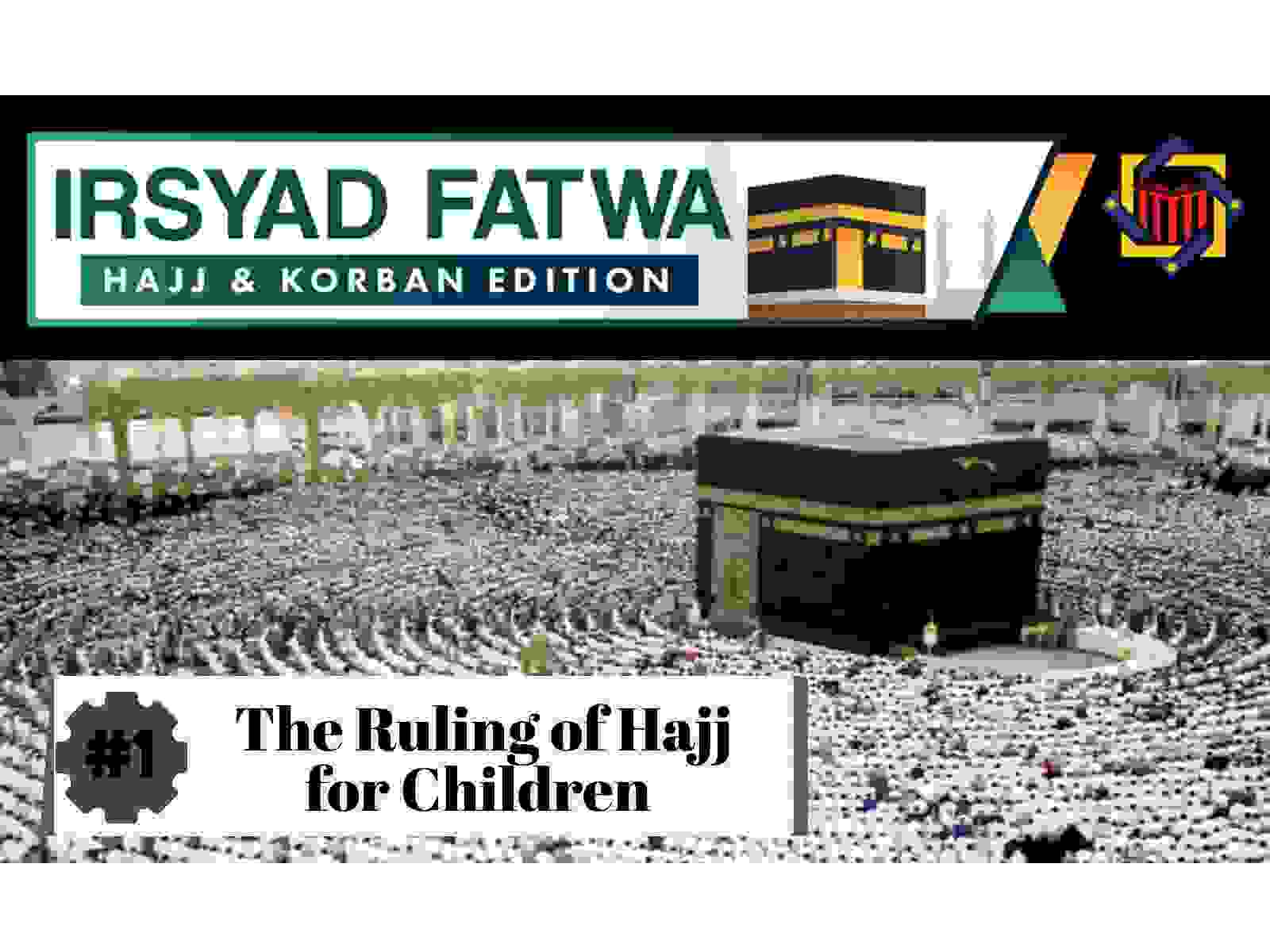 Assalamualaikum S.S Mufti. What is the ruling for a child who is brought along by his parents to perform hajj and is the hajj performed by the child valid?

This is a recurring issue in our society every year. Hence, in this series of Irsyad Fatwa hajj and Qorban edition, we take the responsibility to answer and explain its rulings further.

Before we discuss this issue further, we would like to state the obligatory conditions of hajj as the following:

First: It must be performed by a Muslim

The reason is, hajj is a type of worship and also one of the pillars of the five pillars of Islam. And worship from disbelievers is rejected. This is in accordance with the statement of Allah SWT:

“And what prevents their expenditures from being accepted from them but that they have disbelieved in Allah and in His Messenger,”

Al-Hafiz Ibn Kathir Rahimahullah commented on the above verse: Allah SWT explains the reason as to why their good deeds are rejected and the reason is for their disbelief in Allah and His Messenger. And indeed, every deed is only valid when one is a believer. See Tafsir al-Quran al-‘Azhim, Ibn Kathir (4/162).

Second: The worship of hajj is only for those who are sound minded

The worship of hajj is rejected and not obligated for those who are insane. The reason is, hajj is worship just like any other worship which has the prerequisite of intention. Hence, it is impossible for an insane person to set his intention for worship. This is in accordance with the words of the Prophet PBUH:

“There are three (persons) whose actions are not recorded: a sleeper till he awakes, a boy till he reaches puberty, and a lunatic till he comes to reason.”

The above hadith clearly states that the three types of people whose actions are not recorded, whether it is in the form of sin or worship. Thus, an insane person can neither commit sin nor perform worship until he comes back to reason.

Puberty is one of the conditions of hajj. This is in accordance with the above hadith narrated by Abu Daud mentioned earlier. While the signs that someone has reached puberty for a boy or a girl is as the following:

The meaning of freedom in this situation is when someone is not a slave (a free man). The reason is, a slave has to fulfil the rights of his owner upon him.

Capability is also one of the obligatory conditions of hajj. This is in accordance with the statement of Allah SWT:

Fiqh scholars divided the meaning of istitha’ah (capability) into two:

The Ruling of Children Performing Hajj

Comprehensive discussions by the jurists on this issue are recorded in their books. According to the obligatory condition stated above, it is clear that hajj is not an obligation for children. However, another question arises. Even though they are not obligated to perform hajj, is it permissible for children to perform hajj and what is the ruling for it?

Hence, the jurists stated that it is permissible for children to perform hajj according to the following evidences:

The Prophet (ﷺ) came across a caravan at Ar-Rauha' and asked who the people in the caravan were. They replied that they were Muslims. They asked: "Who are you?" He (ﷺ) said, "I am the Messenger of Allah." Then a woman lifted up a boy to him and asked: "Would this child be credited with having performed the Hajj (pilgrimage)?" Whereupon he (ﷺ) said, "Yes, and you will have a reward."

Second: according to a hadith from al-Sa’ib bin Yazid RA, he said:

“(While in the company of my parents) I was made to perform Hajj with Allah's Messenger (ﷺ) and I was a seven-year-old boy then.”

“We performed Hajj with the Messenger of Allah (ﷺ), and there were women and children with us. We recited Talbiyah on behalf of the children and stoned the Pillars on their behalf.”

According to the above three hadiths, it is clear that it is permissible for children to perform hajj and the hajj is valid. However, hajj performed when one is just a child is not considered as Islamic hajj, which means it is not the obligatory hajj on them. This means, when the child reaches puberty, then it is obligated for him to perform hajj.

The following are the opinions of fiqh scholars regarding this issue:

Third: Imam Ibn al-Munzir said: The majority of scholars have agreed (with the exception of peculiar opinion), there are no differing opinions that for a child who has not reached puberty and a slave who has not been freed, then when the child reaches puberty and the slave is freed, then both of them are obligated to perform Islamic hajj (obligatory hajj) when they are capable to do so. Refer Al-Mughni, Ibn Qudamah (5/44).

After analysing the above opinions stated previously, in our opinion it is permissible for children to perform hajj. Parents who bring their children will get the rewards of the hajj and the hajj is valid. However, the hajj is not considered as obligatory hajj for the child. Hence, once the child reaches puberty, he has to perform it again. This is in accordance with the words of the Prophet PBUH:

“Any minor (child) who performs Hajj must perform it again after coming of age.”

Al-Hafiz Ibn Hajar al-Asqalani stated the above hadith as sahih in his book Al-Talkhis Al-Habir (2/220). We pray to Allah SWT to make our short-written explanation could give understanding to society and be of benefit to us all. Ameen.