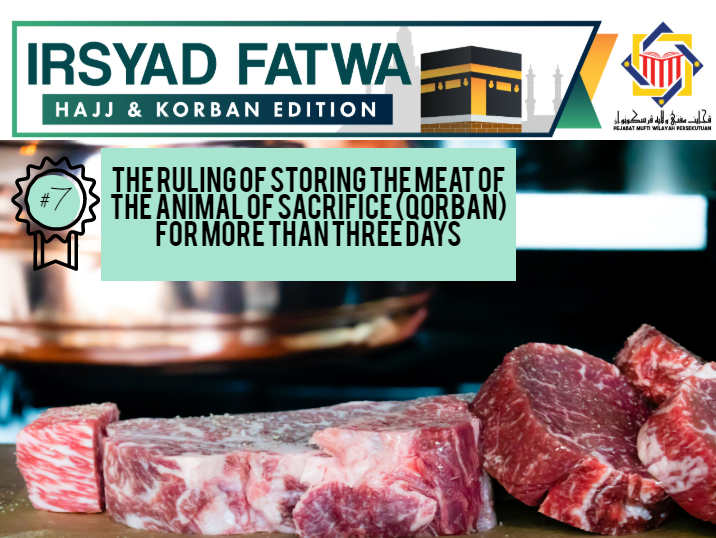 There is a hadith from the Prophet PBUH prohibiting us from storing the meat of a sacrificed animal (qorban) for more than three days. How should we understand and apply this hadith in our lives?

Answering the above question, scholars have differing views as the ruling of storing the meat of sacrificed animal (qorban) for more than three days and three nights. Their opinions are divided into two popular opinions:

“I was with 'Ali b. Abi Talib on the occasion of the 'Id day. He started with the 'Id prayer before delivering the sermon, and said: Allah's Messenger (ﷺ) forbade us to eat the flesh of our sacrificial animals beyond three days.”

“None of you should eat the flesh of his sacrificial animal beyond three days.”

There is also an athar stating that Ibn Umar R.Anhuma did not eat the meat of sacrificed animals after three days have passed and this is narrated by his son, Salim.

“The Prophet (ﷺ) did not do this except in the year when the people were hungry, so he wanted the rich to feed the poor. But later we used to store even a trotter of a sheep to eat it fifteen days later.”

There are other hadiths that state the prohibition has been abrogated, some of them are:

“Whoever has slaughtered a sacrifice should not keep anything of Its meat after three days." When it was the next year the people said, "O Allah's Messenger (ﷺ)! Shall we do as we did last year?" He said, ' Eat of it and feed it to others and store of it for in that year the people were having a hard time and I wanted you to help (the needy).”

“O people of Medina, do not eat the flesh of sacrificed animals beyond three days. Ibn al-Muthanni said: Three days. They (the Companions of the Holy Prophet) complained to the Messenger of Allah (may peace be upon him) that they had children and servants of theirs (to feed), whereupon he said: Eat, and feed others, and store, and make it a provision of food.”

Reviewing the facts of the above discussion, we would like to state that the second opinion is more accurate and the first opinion is abrogated as stated in other related narrations stated previously.

Al-Imam al-Nawawi Rahimahullah said: “It is permissible to store some of the meat of the animals of sacrifice. The Prophet PBUH did originally prohibit storing it for more than three days but he later permits it in an authentic (sahih) and famous (masyhur) hadith.” (See al-Majmu’ Syarh al-Muhazzab. Dar al-Fikr, 8/418)

We should also consider the reason as to why the Prophet PBUH originally prohibited it, for there was famine during that time and the purpose of him prohibiting it is to help those who are in need of food. If the meat of sacrificed animals is stored for more than three days, surely the purpose of sacrifice itself which is to give those are in need is unfulfilled. This is also stated by al-Imam al-Nawawi in his book al-Mu’jam. Wallhua’lam.