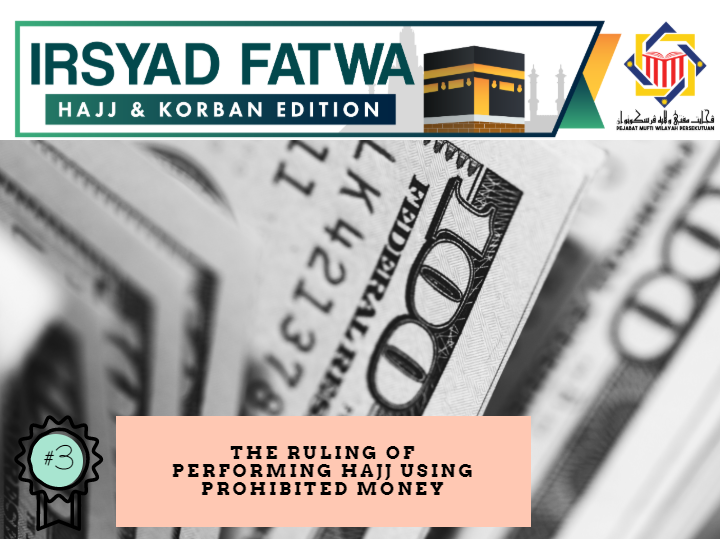 Assalamualaikum Sahibus Samahah Datuk Mufti, what is the ruling of someone who performed hajj from prohibited money?

In answering this issue, first we would like to explain the definition of prohibited money and then we will clarify the answer to the question including the opinions of scholars regarding this issue.

The Definition of Prohibited Assets

Imam al-Ghazali Rahimahullah defined prohibited assets as Something obtained through prohibited means such as usury, bribe, gambling and ihtikar (monopoly).

The following are examples of prohibited assets:

The following are several opinions of the jurists regarding the issue of performing hajj using prohibited assets:

What we meant by the majority of scholars here is the opinion of the three main madhab which is the madhab of Imam Abu Hanifah, Imam Malik and Imam Syafie. The following are the statements of prominent scholars of madhab al-Syafie regarding this issue. Al-Imam al-Nawawi Rahimahullah said: When someone performs hajj using prohibited money or if he travels on the animal mount which is taken by force, then he is sinful and his hajj is valid in our opinion. This is the opinion of Abu Hanifah, Malik, al-Abdari and majority of the scholars. Refer Al-Majmu’ Syarah Al-Muhazzab, Al-Nawawi (7/62).

Imam al-Nawawi argued, hajj is specific worship (have prerequisites and conditions) and the prohibition is neither comes from among its prerequisites nor of its conditions.

Al-Syeikh al-Bujairami al-Syafie said: It is sunnah for someone who will perform hajj to ensure that the assets he brought for all his travel are permissible. Indeed, Allah SWT is thayyib (good) and He will only accept what is good.

He also states that there is a narration saying:

“Whoever performs hajj using prohibited assets, when he recites his talbiah, it will be said to him: “Your call is unanswered, there is no happiness for you and your hajj is rejected.”

The founder of this madhab which is Imam Ahmad bin Hanbal Rahimahullah said: Hajj such as this is invalid, according to the following hadith:

“Allah is Good and He, therefore, accepts only that which is good.”

A prominent scholar of madhab Hanbali, Syeikh Abu Ali bin Abi Musa al-Hashimi said: Whoever performs hajj using prohibited assets, then the hajj is not considered as hajj according to an authentic opinion of the madhab.

We are inclined towards the opinion of the majority of fuqaha’ (jurists) which states that if someone performs hajj using prohibited money, then he is considered as sinful and his hajj is valid. The reason is, the related matters of hajj are separated from the prohibition of using prohibited money and we agree with the arguments presented by the majority of scholars.

According to the above discussion, in our opinion, if the worship of hajj fulfils all of its prerequisites, conditions, manners and sunnah in the implementation of manasik of hajj, then the hajj is valid according to most fiqh scholars. However, as for the worship of hajj, the issue is not wholly dependent on its validity, but the greatest consideration should be the acceptance of the worship itself. The reason is, when someone’s hajj is accepted, then he is going to get a great reward of heaven from Allah SWT. So true are the words of the Prophet PBUH, where he said:

“And the reward for Hajj Mabrur (the one accepted by Allah or the one which was performed without doing any wrong) is nothing save Paradise.”

Secondly, a poet once said:

“When you went to perform hajj using assets from the prohibited origin, then in truth, it is not you who perform hajj but your camel. Allah does not accept anything but what is good. Not all who went to baitullah will get his hajj to be accepted.”

Even if jihah munfakkah according to madhab Imam al-Syafie is considered as separate but the acceptance of the hajj itself is the main purpose when one is performing hajj. Hence, make sure that the source of everything that we bring in our travel for hajj is 100 per cent permissible without a doubt. This is what the salafussoleh and the righteous people have practised in their lives. May Allah SWT accept our hajj. Ameen.