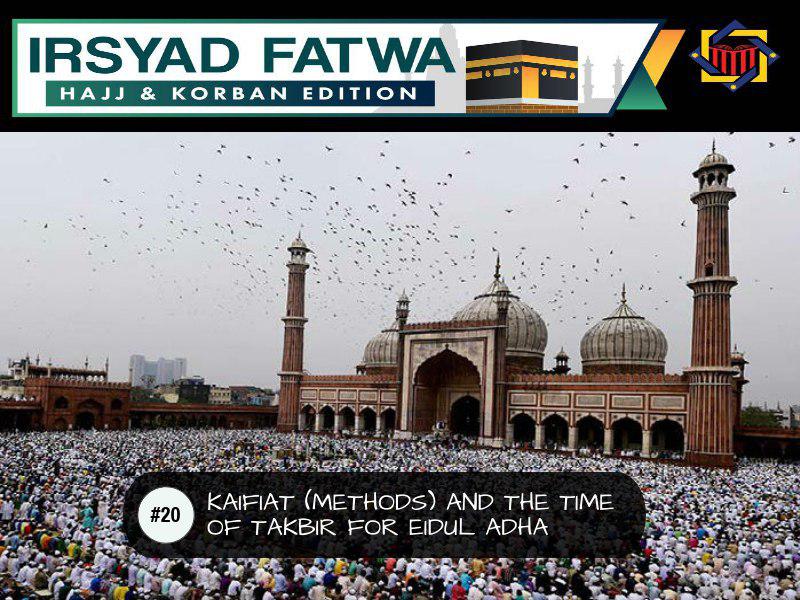 Assalamualaikum. When is the time of takbir for Eidul Adha? Is it the same with Eidul Fitri or are there any differences between these two festivities? Thank you.

“For you to complete the period and to glorify Allah for that [to] which He has guided you; and perhaps you will be grateful.”

Takbir during ‘Eid is an eminence which is a Sunnah for us to practice. However, there are details and differences between takbir for Eidul Adha and Eidul Fitr. They are as follows:

Types of Takbir for ‘Eid

The Time for Takbir

As being mentioned before, there are differences in the time of takbir for Eidul Adha and Eidul Fitr. These following Kaifiat (methods) we gathered from the actions of the Prophet PBUH and his companions, which passed on to the scholars.

Here, we cite statements on this from Sabila al-Muhtadin (page 57) by Syeikh Muhammad Arsyad al-Banjari:

“Takbir (for those) without performing hajj starts from the Subh of Arafah day, which is the ninth [Zulhijjah] until the ‘Asr of the last day of tasyriq”

“And Takbir Muqayyad is also done on the day of Eidul Adha, starting from the Subh of Arafah day for those who do not perform hajj until the performance of ‘Asr prayer of the last tasyriq day”

It is Sunnah for us to recite takbir on Eidul Adha and Eidul Fitr according to sighah or lafaz which is warid (transmitted) from Rasulullah PBUH, the companions R.anhum, and are accepted as well as practiced by the past scholars in their respective times. Among the renown verses are:

The time of takbir for Eidul Adha and Eidul Fitr is different between each other. However, its purpose is the same in which it is meant to glorify Allah SWT on the days where Syarak tells us to celebrate them. This is the eminence and symbol of our religion that wants us to celebrate it whole-heartedly as a manifestation of our commitment and obedience to the One and Only God.

[1] According to the strongest opinion, as there is no narration from the Prophet PBUH regarding takbir muqayyad on the night of Eidul Fitr.

[2] According to Imam Ibn Hajar al-Haitami, its time ends after the performance of ‘Asr prayer.

[4] This is as being indicated by Imam al-Syafie in al-Umm. He also holds the opinion that any addition in zikrullah is okay. Refer to al-Majmu’ (5/39)

[5] This addition is practised by the scholars, even according to al-Nawawi in al-Adzkar, it is not warid (transmitted from Rasulullah PBUH). Refer Fath al-Wahhab Syarh Manhaj al-Tullab (1/98) by Syeikh al-Islam Zakariyya al-Ansari and Hasyiah al-Qalyubi wa Umairah (1/359).