IRSYAD AL-FATWA HAJJ AND QORBAN (SACRIFICE) SERIES 21: IS IT PERMISSIBLE TO PERFORM HAJJ WITHOUT THE EMPLOYER’S PERMISSION 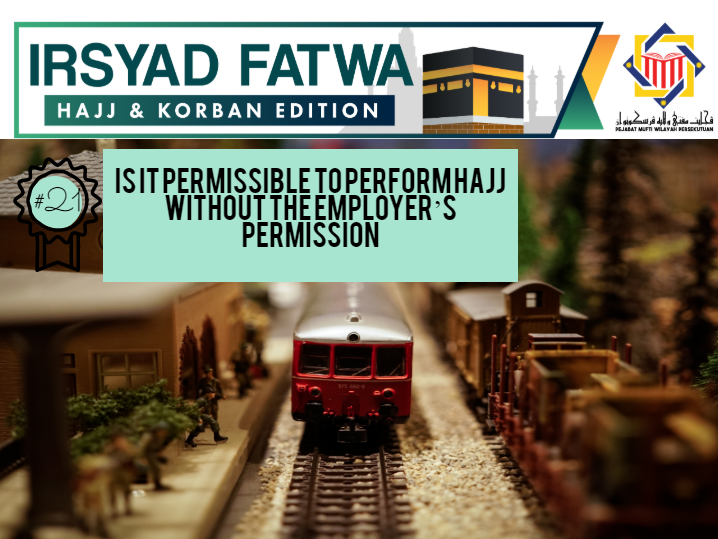 Assalamualaikum Dr I work for Mecca Metro Train. According to my contract, I’m not allowed to perform hajj during my work hours. However, my seniors advised me to secretly perform hajj when I’m off duty. What is the ruling of me performing hajj when I’m on duty, for I’m being given the responsibility to ensure the smoothness of the process of pilgrimage for hajj? What are your suggestions; should I perform hajj or focus on my given task?

Hajj is the fifth pillar in Islam and it is obligatory for every Muslim to perform and learn it. Whoever denies this is considered as a disbeliever and has renounced Islam. Allah SWT state:

The same is stated in a hadith narrated by Abu Hurairah RA, the Prophet PBUH said:

“Verily, al-Islam is founded on five (pillars): testifying the fact that there is no god but Allah, the establishment of prayer, payment of Zakat, fast of Ramadan and Pilgrimage to the House.”

Hence, hajj is unanimously decided as an obligation by scholars. They also state that a person who denies anything decided in the Quran, al-Sunnah and ijma’ is considered as a disbeliever.

The Capability of Someone in Performing Hajj

The obligation of hajj is only for those who are capable to perform it. Among the capabilities is one’s safety when he is performing hajj. It is not obligatory when there is a threat or harm on himself or property. Allah SWT state:

“And spend in the way of Allah and do not throw [yourselves] with your [own] hands into destruction [by refraining]. And do good; indeed, Allah loves the doers of good.”

Furthermore, al-Istita’ah (capability) also plays an important role in determining the obligation of hajj upon someone. Allah SWT state:

The people who are able, are those who have sufficient property for hajj and umrah. Property meant here includes transportation, travel expenses, passport and visa payments and the wage for a travel guide for hajj and umrah as requested by the government. All this property must be the surplus from his debt and expenses for his dependents during his absence. (See al-Fiqh al-Manhaji, 2/123)

Among the attributes of a believer is to honour his promise in agreements. This attribute is explained in the Quran and al-Sunnah. Allah SWT state:

O you who have believed, fulfil [all] contracts.

Dr Wahbah al-Zuhaili commented on the above verse stating: “Honouring contracts is a commendable attribute. Breaking a promise is among the attribute of khianat (betrayal) and nifaq (hypocrisy). A breach of contract will result in loss of reputation and trust. Hence, according to syarak, it is obligatory to honour one’s contract. Whoever breaches his contract or break his promise has committed a transgression and a sin.” (See al-Tafsir al-Munir, 15/73)

While Syeikh al-Maraghi added: honouring the promise made in accordance with Islamic and civil laws that do not contradict with the commandments of Allah SWT. (See Tafsir al-Maraghi, 8/3945-3946)

According to the above question and by reviewing the pieces of evidence, in our opinion, it is impermissible to perform hajj as it will go against the contract he had signed. The reason is, it is not an obligation for him to perform hajj, for he is not considered from among those who are capable (istito’ah). This is to prevent any harm from falling on him, such as legal actions taken against him and others. This is as stated by Allah SWT:

“And do not throw [yourselves] with your [own] hands into destruction.”

However, if he has performed the hajj fulfilling the requisites and obligatory conditions, then his hajj is valid and his obligation is fulfilled. However, we advise you to honour the contract you have signed. The action of breaching a contract contradict with the syarak and ethics of a Muslim. It is prohibited and sinful. Allah SWT state:

“O, you who have believed, do not betray Allah and the Messenger or betray your trusts while you know [the consequence].

Hopefully, with your patience and responsible actions in your work, Allah SWT will bless you with a chance to perform hajj in the future.