IRSYAD FATWA HAJJ AND QORBAN SERIES 22: QORBAN FOR THE SAKE OF MOTHER IN COMA 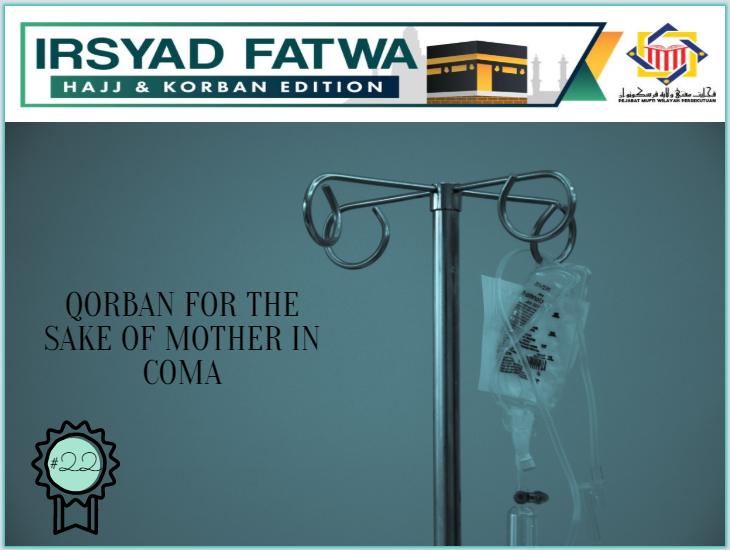 Assalamualaikum. I want to ask regarding qorban. For your information, my mom is in the state of coma for 5 years already. Is it permissible for me to do qorban for the sake of my sick mom? Thank you.

The Sanctioning of Qorban

Worship of qorban is one of the eminences of Islam. It is for all Muslims to preserve and practice. Furthermore, this act of worship was already done by the Prophet Abraham AS who was tested by the commandment of slaughtering his beloved son, Ismael AS. It was to bring him closer to Allah SWT. Allah SWT says in the Quran:

“So pray to your Lord and sacrifice [to Him alone].”

It is also stated in the hadith:

It is Sunnah muakkadah (highly encouraged Sunnah) to do qorban for all Muslims who are able to do so. (Refer: al-Mu’tamad fi al-Fiqh al-Syafi’e, 2/478)

Performing Qorban for the Sake of Others

Every deed is rewarded by the intention of the act. It is because, the original basis of worship is to not be done by others, except if there are indications from the dalil which permit it. This is as stated in the Quran:

It is also stated in the Quran:

“It will have [the consequence of] what [good] it has gained”

Imam Nawawi in addressing this issue states: “If a person does qorban for others’ sake without having their permission, then the act is not counted as qorban”. (Refer: al-Majmu’ Syarah al-Muhazzab, 8/406)

Besides, Dr Muhammad al-Zuhaili states in his al-Mu’tamad: “It is invalid to do qorban for the sake of other living people, unless after having their permission. This is because, originally, it is impermissible for worships to be done by others, except if there is any valid evidence on doing so. Especially, if there is no permission taken. However, if a person performs qorban, then Sunnah kifayah upon all his households is lifted, although they did not know about it”. (Refer: al-Mu’tamad fi al-Fiqh al-Syafi’e, 490)

Coming back to the question above, we list out two situations:

May we be granted the correct understanding in practising His shari’a. Ameen