IRSYAD AL-FATWA HAJJ AND KORBAN SERIES 41: THE RULING OF SELLING THE KORBAN MEAT 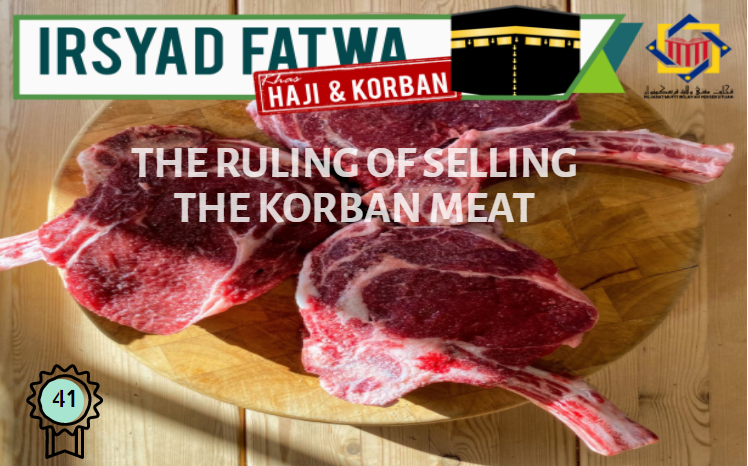 Assalamualaikum. I received some kilos of korban meat and I am short in money. Is it permissible for me to sell them to get money?

Korban is a highly commendable act of worship in Islam. Korban is only done once a year along with the Eid al-Adha celebration. Allah SWT says:

And for all religion, We have appointed a rite [of sacrifice] that they may mention the name of Allah over what He has provided for them of [sacrificial] animals.

Korban is Sunnah muakkadah to Madhhab al-Shafi’e as the symbol of preserving the Islamic eminence for those who are capable. (Refer al-Mu’tamad fi Fiqh al-Syafie, 2:478)

Among the main reason for doing korban is as a symbol of concern towards society through the distribution of the meat to those who are eligible especially towards the needy and poor. Allah SWT says:

So eat of them and feed the miserable and poor.

The Prophet PBUH prohibits giving korban meat as the wage for the slaughterer. As narrated by Ali bin Abi Talib:

"The Prophet (ﷺ) ordered me to supervise the slaughtering (of the Budn) and not to give anything (of their bodies) to the butcher as wages for slaughtering."

There is a narration by Imam Muslim with the addition from Ali bin Talib RA:

“We give the slaughterer a wage from our own (money)”

Then Imam al-Nawawi said that the selling of the skin, meat or any parts from it is prohibited in madhhab al-Shafi’e. This is as stated by him in his book:

“In my knowledge, the scholars decided that the korban meat is not to be sold”

However, if the recipient of the korban meat is among the poor and needy, then it is permissible to be sold. Habib Abdul Rahman al-Ba’lawi mentioned in his book:

“For the needy and poor, spending the korban part he received even by selling it (is permissible) because he already owned it, different from the rich who did so is prohibited, but he may use the korban meat by giving sadaqa or feeding the neighbours even if they are rich. This is because their position is the same as those who did the korban.”