IRSYAD AL-FATWA HAJJ AND KORBAN EDITION SERIES 42: REPLACING THE ARAFAH FASTING DUE TO HAVING MENSES ON THAT DAY 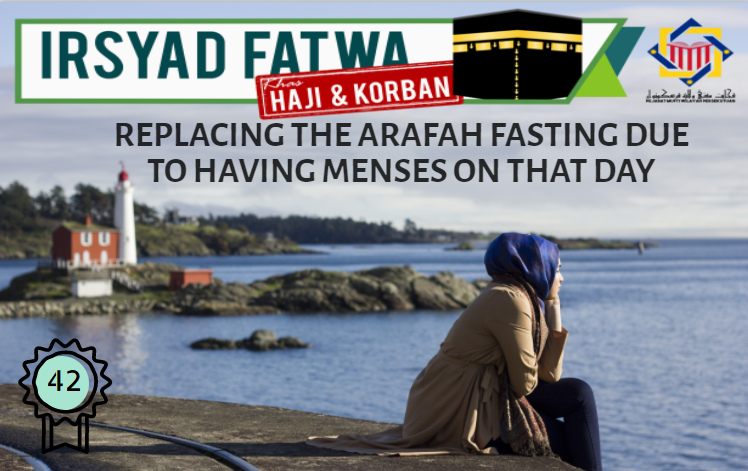 Assalamualaikum wbt. If I am still on my menses on that day of Arafah, is it permissible for me to replace the Sunnah fasting to acquire the Sunnah reward and advantage of those who fast?

It is Sunnah to replace the Sunnah fasting based on the general statement from the hadith of the Prophet PBUH who sanctioned replacing Sunnah acts of worship left.

Alhamdulillah, praise and thanks to Allah for the countless blessings He has blessed us all with. Blessings and salutations to the Prophet Muhammad PBUH, his wives, his family, companions, and all those that follow his teachings to the day of judgement.

Fasting on the day of Arafah is among the Sunnah fasting with a great reward from Allah SWT. Among the advantages is it may expiate the sins of the past and upcoming year. This is in accordance with the hadith of the Prophet PBUH:

“Fasting on the Day of ‘Arafah, I hope from Allah, expiates for the sins of the year before and the year after.”

Arafah fasting is Sunnah to be done on the day of Arafah which is the 9th of Zulhijjah. It is included among Sunnah muaqqatah worships which means Sunnah acts with a specified time in which it is sanctioned due to a specific time. Among other examples is the Ashura fasting (Sunnah on the 10th Muharram), 6 days of Shawwal fasting as well as Monday and Thursday fasting. (Refer: Nihayah al-Zain, 1/185). [1]

The scholars state that it is Sunnah to replace the Sunnah muaqqatah acts of worship that were missed. This is based on the method of analogical deduction to a hadith stating on replacing the rawatib Sunnah prayers.

This matter is mentioned by Shaikh Zakariyya al-Ansari:

And it is Sunnah to replace the Sunnah acts of worship with a specified time that was missed like the two Eid’s Sunnah prayer, dhuha prayer, rawatib prayer the same as (it is also sanctioned) to replace the obligatory prayers which are left because both prayers have its specific time. This is based on a hadith narrated by al-Bukhari and Muslim “Whoever slept then missed the prayer or forgotten, he shall perform it when he remembers”, and because the Prophet PBUH replaced two rakaats of Sunnah Zuhr prayer which he performed after Asr. It is also narrated by al-Bukhari and Muslim that the Prophet PBUH replaced the two rakaats Sunnah Subh prayer after the sunset which is when he missed the Subh prayer due to sleeping in a valley. This hadith is also narrated by Abu Dawud with a sahih sanad and chain of narrators as in Sahih Muslim. Then it is excluded for prayers that are performed for specific reasons like the eclipse and tahiyyatul masjid prayers. So it is not Sunnah to be replaced. (Refer Fath al-Wahhab, 1/114).

Hence, based on the above explanation, we may understand some matters as follows:

Therefore, it is clear that it is Sunnah to replace Sunnah acts of worship with a specified time that was missed whether it is Sunnah prayer or Sunnah fasting. This is the decided (mu’tamad) opinion in maddhab al-Shafi’e. While the weak opinion states that it is not Sunnah to be replaced because the time has ended or passed. (Refer: Hasyiyah al-Jamal, 2/651). [2]

Imam al-Bujairimi also gave commentary on this matter, he said:

He (the author) said: and it is Sunnah to replace Sunnah acts of worship with a specified time according to the decided (mu’tamad) opinion and it is not Sunnah to replace according to the weak opinion like it is (also not Sunnah) to replace other Sunnah acts of worship of no specified time. But it is exempted from this matter for Sunnah Jum’ah prayer, as it is cannot be replaced because it is invalid to perform Juma’ah prayer out of its time. The same goes for (replacing Sunnah worships) for Sunnah prayers with a specified time like the Arafah fasting. (Refer: Hasyiyah al-Bujairimi ‘ala Syarh Manhaj Tullab, 1/283).