IRSYAD AL-FATWA HAJJ AND KORBAN EDITION SERIES 46: THE RULING OF GIVING WAGES OF KORBAN IN THE FORM OF CASH MONEY 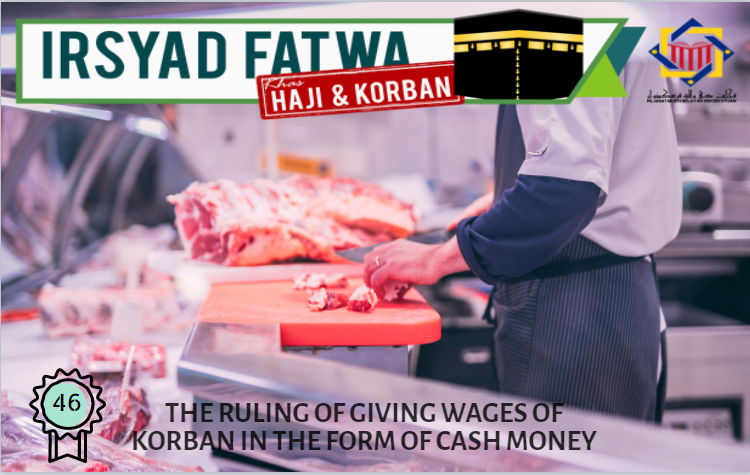 Assalamualaikum. I know that it is prohibited to make the korban meat as wages for the slaughterer. However, a question arises on is it permissible for the organizer to give wages or tokens of appreciation to the slaughterer? Hope for an explanation.

The ruling of giving wages or token of appreciation in the form of cash money for the slaughterer is permissible with the condition that it is from the organizer’s money himself.

A korban slaughterer is prohibited to take wages from any part of the korban animal. It can be seen through the hadith narrated by Abdurrahman bin Abi Laila that Saidina Ali said:

‘Ali said that God’s messenger put him in charge of his sacrificial I camels, telling him to give their flesh, skins, and saddle-cloths as sadaqa, but not to give anything to the butcher, saying he would pay him himself.

So, the above hadith becomes the dalil that it is prohibited for a slaughterer to take wages from the korban animal. However, wages or appreciation money still may be given to the slaughterer with the condition that it must be coming from the organizer’s property or the one who does the korban. (Refer Ma’alim al-Sunan 158/2; al-Minhaj Syarh Sahih Muslim 65/9)

The masjid authorities or the organizer may also set the price for korban by including a relevant cost of management to those who participate in korban in certain areas. The management cost may partly be given to the slaughterer due to using his expertise in that matter. The same goes for other costs bore by the slaughterer like transportation cost and time used. Kindly refer to our past article in IRSYAD AL-FATWA HAJJ AND SACRIFICE (QORBAN) SERIES 16: THE RULING OF MEAT OF ANIMAL SACRIFICE AS PAYMENT FOR SLAUGHTER

The ruling of giving wages or token of appreciation in the form of cash money for the slaughterer is permissible with the condition that it is from the organizer’s money himself.