IRSYAD AL-FATWA SERIES RAMADHAN EDITION 56: THE RULING FOR THOSE WHO REFUSE TO PAY ZAKAT 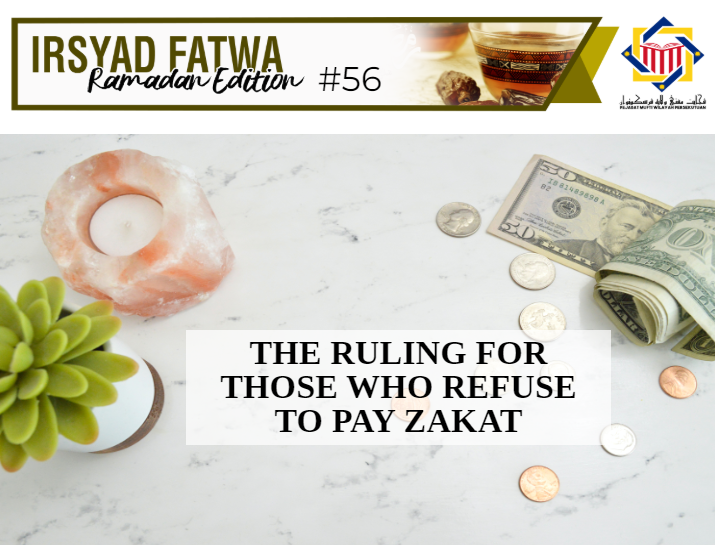 What is the ruling of a person refusing to pay zakat?

Here, we will explain the types of people who refuse to pay the zakat according to their intentions:

First: People who refuse to pay the zakat disobeying the obligation

Zakat is the third pillar of Islam after the recitation of syahadah and performance of prayer. Thus, scholars agreed that those who oppose and disobey the commandment of the payment of zakat are considered as disbelievers and people who have renounced Islam. It is permissible to sentence them for execution if they refuse to repent. The reason is the obligation of zakat is something which can be easily understood without the need for arguments and evidences.

Imam al-Nawawi Rahimahullah wrote in the book al-Khattabi saying: “Whoever denies the obligation of zakat now is considered as disbelievers according to ijma’.” He further adds: “The fact of the obligation of zakat is well-known by both the people and the rulers, including the alim and ignorant. Thus, there is no excuse for anyone to make their own interpretation (تأويل) to deny it. The same for the rulings in religion that have been agreed by scholars such as the five obligatory prayers, fasting in the month of Ramadhan, obligatory bath, the prohibition of fornication, marriage and other rulings.”

Ibn Hajar al-Asqalani said: “As for the dalil on the obligation of zakat, whoever denies it is considered as a disbeliever.”

Second: People who refuse to pay zakat because of their stinginess and miserliness

People who refuse to pay zakat while he believes that it is wajib and acknowledge its obligation is ruled as a fasiq, sinful and will be punished by Allah SWT in the hereafter. Allah SWT states:

“O you who have believed, indeed many of the scholars and the monks devour the wealth of people unjustly and avert [them] from the way of Allah. And those who hoard gold and silver and spend it not in the way of Allah - give them tidings of a painful punishment. The Day when it will be heated in the fire of Hell and seared therewith will be their foreheads, their flanks, and their backs, [it will be said], "This is what you hoarded for yourselves, so taste what you used to hoard."

This is in accordance with a hadith from Ibn Umar RA, where the Rasullullah PBUH said:

The same is stated in a hadith from Abu Hurairah RA, where the Prophet PBUH said:

"Whoever is made wealthy by Allah and does not pay the Zakat of his wealth, then on the Day of Resurrection his wealth will be made like a baldheaded poisonous male snake with two black spots over the eyes. The snake will encircle his neck and bite his cheeks and say, 'I am your wealth, I am your treasure.' "

Next, the Prophet PBUH recited the statement of Allah SWT:

“And let not those who [greedily] withhold what Allah has given them of His bounty ever think that it is better for them. Rather, it is worse for them. Their necks will be encircled by what they withheld on the Day of Resurrection. And to Allah belongs the heritage of the heavens and the earth. And Allah, with what you do, is [fully] Acquainted.”

The verse explains that only to Allah SWT belongs the inheritance of the heavens and earth. Thus, why would they withhold their property and refuse to spend it in the path of Allah SWT?

In this world, it is permissible to forcefully seize zakat from those who refuse to pay it without denying its obligation. If they refuse to pay the zakat and prevent the ‘amil from taking it, then the Muslim ruler reserves the right to carry out the commandment of Allah SWT and take actions against them.