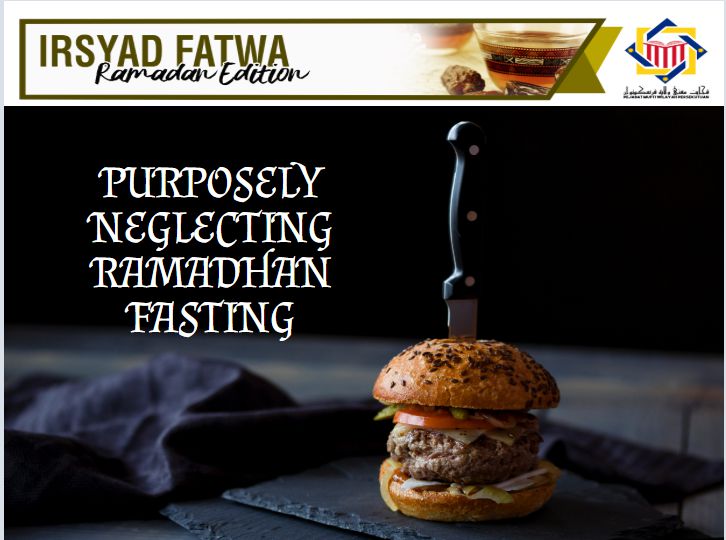 Assalamu‘alaikum SS Datuk Mufti. What is the ruling of someone who intentionally not fast in Ramadhan?

There are numerous pieces of evidence that warns against the act purposely neglecting one’s fast without any valid reasons (permitted by syarak), such as if one is ill or travelling. Thus, the following are the evidence regarding the warnings of not fasting:

“Islam is tied together and there are three pillars of which it is built on. Someone is considered a disbeliever and his blood is permissible (to be shed) if he does not have the following; syahadah, prayer, and fast in Ramadhan.”

Imam al-Haitami said in Majma’ al-Zawaid (1/47-48): This hadeeth is narrated by Abu Ya’la in a complete form as well as alTabarani in al-Mu’jam al-Kabir. However, it is stated until the word ‘three pillars’ only and this narration of Ibn Abbas was not mentioned. Its chain of narrators is valid. Al-Munziri said in al-Targhib wa al-Tarhib (1/382): This hadeeth on the narration of Abu Ya’la has a valid chain of narrators.

“If anyone breaks his fast one day in Ramadan without a concession granted to him by Allah, a perpetual fast will not atone for it.”

According to the above hadiths, it is clear how important it is for someone to observe the fast in Ramadhan, it is even stated as a pillar that needs to be upheld in a Muslim’s life.

The writer included a firm opinion by Imam al-Zahabi, where he said: “It has been agreed that whoever neglects the fast in Ramadhan without any valid reason (permitted by syarak), in truth are worse than an adulterer or an alcoholic, even his faith in Islam is doubtful and is considered as kafir zindiq who deviates from the true Islamic teachings.”

The above hadith is a clear statement of if someone did not fast in Ramadhan without any valid reasons (permitted by syarak), it will be impossible for him to replace his fasting and obtain the equivalent rewards of fasting in Ramadhan.

In al-Fiqh al-Manhaji, it is stated: Ramadhan fasting is one of the pillars in Islam as well as an obligation. Thus, whoever disobeys this commandment saying that it is not an obligation is considered as a disbeliever and must repent the same way as someone who renounced Islam. If he refused to repent, he should be prosecuted if he has been a Muslim for a long time and live near the scholars.

Whoever does not fast without denying it is an obligation is considered as a fasiq. The government should imprison him and prevent him from eating and drinking even if he is unwilling.

Hence, Muslims should not take the matters of fasting in Ramadhan lightly but should be determined to observe it the best that they can.