IRSYAD FATWA SERIES RAMADHAN EDITION 32: THE STATUS OF THE HADITH “FAST, SURELY YOU WILL BE HEALTHY” 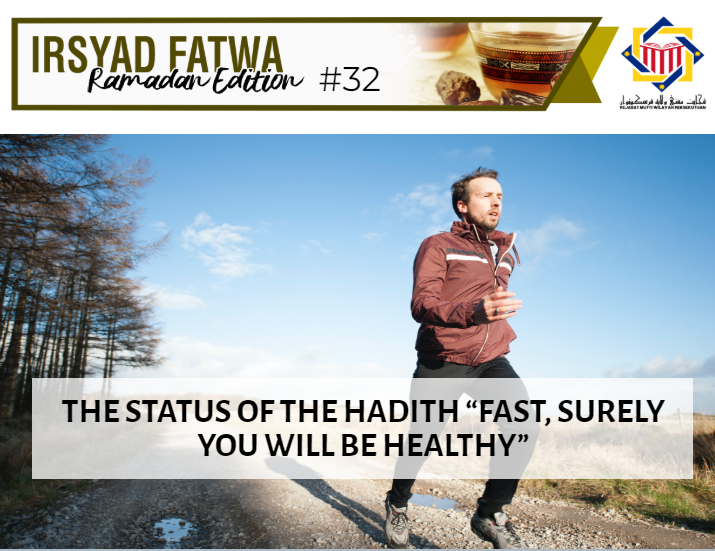 Assalamu‘alaikum SS Dato’ Mufti. What is the status of the following hadith?

“Fast, surely you will be healthy,”

Fasting in Ramadhan is one of the pillars of Islam. This is in accordance with the commandments stated in numerous Quranic and prophetic evidences, which states its obligation. Hence, everything that is sanctioned by Allah SWT surely, have countless wisdom behind it.

This hadith is also narrated by Ibn Abbas R.Anhuma and Ali bin Abi Thalib RA. However, all these narrations have a problem in its sanad (chain of narrators). Among the scholars who commented on this hadith:

As a conclusion, this hadith is narrated by a group of the companions of the Prophet PBUH but cannot be backed up to be from the Prophet PBUH. Thus, scholars have differing opinions regarding the status of this hadith. Some moderate opinion of scholars’ states that the hadith is dhaif (weak) but is acceptable for it is not related with what is permissible and prohibited. Consequently, other scholars hold the opposite opinion for the hadith explains on fadhail matters.

However, this does not mean (matan or text of the hadith) that this is an unsound hadith. The reason is, through the field of science and medicine, it has been proven that fasting has a lot of health benefits. Furthermore, there are some doctors that make fasting as a part of a treatment for certain diseases. Other than that, most people misunderstand that the obligation of fasting is due to these health benefits, while the real purpose is as an act of obedience of a slave towards his Creator and God to attain taqwa.

Every single thing that is sanctioned by Allah SWT for His slaves, there are numerous secrets and wisdom behind it and the benefits will be for those who performed it. May Allah SWT bless us with great health so that we will be able to complete and perfect our worship the best that we could. Amin.