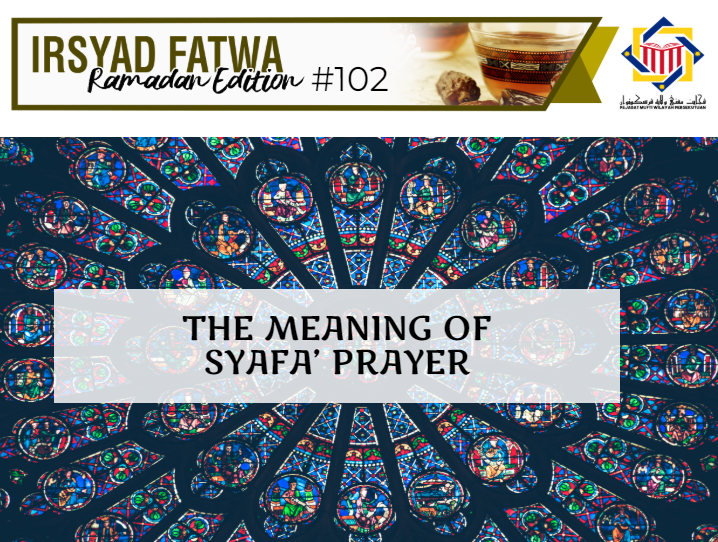 When I was in the Middle East, the imam would always announce about performing syafa’ prayer together with witir. What did he mean by saying that? Is there such prayer (known as syafa’ prayer)?

In this issue, there are two words that should be considered which are the word syafa’ and witir. Lexically, syafa’ means even or in pairs while the antonym for it is single or alone.

While for the word witir or read وَتْر / وِتْر watru and witru it means single which is the antonym of syafa’. The term witir means: Certain prayer performed in certain times to end the night. Regardless whether it is performed at the beginning, middle or end of the night. It is performed in odd number rakaat, thus this is why it is known as witir.

The discussion related to syafa’ and witir involves the kaifiat or methodology of the witir prayer itself. The reason is scholars have stated several methods of performing the witir prayer:

According to the majority of scholars, it is permissible to perform witir prayer for only one rakaat. This is in accordance with a narration from Ibn Umar R.Anhuma where the Prophet PBUH said:

In this category, three rakaat witir prayer can be performed through two methods:

This is according to a hadith narrated from Ibn Umar R.Anhuma, where it is said:

“`Abdullah bin `Umar used to say Taslim between (the first) two Rak`at and (the third) odd one in the Witr prayer,”

The same is stated in another narration from Ibn Umar, where he said:

“Indeed, the Prophet PBUH once separate between syafa’ and witr prayer.”

Thus, this is the methodology named as syafa’ prayer, although in truth it is witir prayer but the three rakaat is performed separately with two salam.

Accurately, syafa’ is not a type of prayer but an antonym for the word witir. It is named as syafa’ because it is performed in two rakaat.

Lastly, may Allah SWT give us all the correct understanding in practising the religion. Amin.