IRSYAD FATWA SERIES RAMADHAN EDITION 103: THE RULING OF FASTING IN COUNTRIES WHERE THE DAYLENGTH IS LONG 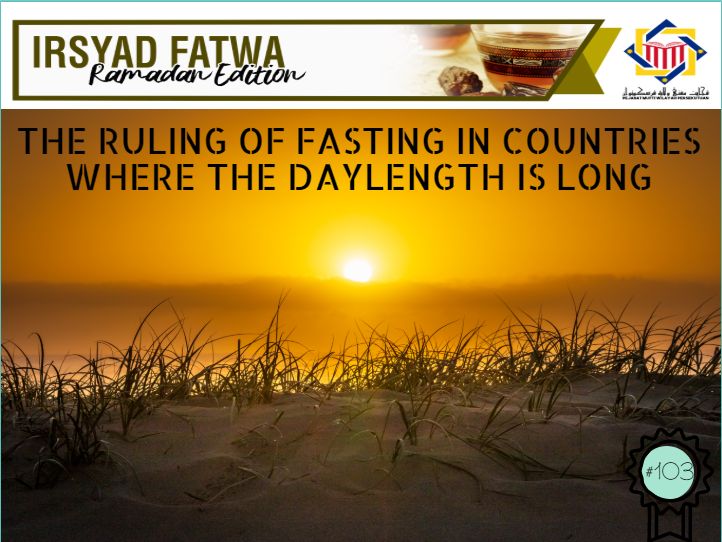 Assalamu‘alaikum SS Dato’ Mufti. I am fasting in Norway where the daylength is 19 and a half hours. How long should I fast?

Islam is a religion of love and mercy and Allah SWT does not burden His slaves. Allah SWT states:

“What is meant by abstaining oneself from the things that invalidate fast throughout the day starts from sun rise until sun set.” Refer Hasyiah al-Bajuri ‘ala Syarh al-Allamah Ibn Qasim al-Ghazzi(1/427)

The situation of which the questioner is in, there are two opinions regarding it:

“Establish prayer at the decline of the sun [from its meridian] until the darkness of the night and [also] the Qur'an of dawn. Indeed, the recitation of dawn is ever witnessed.”

In another verse, Allah SWT states:

“Indeed, prayer has been decreed upon the believers a decree of specified times.”

Both of the above verses of the Quran is supported by a hadith from Abdullah bin Amru bin al-‘As. The Prophet PBUH said:

Thus, according to this opinion, although the daylength is for 19 hours long but the time for fasting will still start from sun rise until the sun sets according to the time in a particularly country someone is in. The reason is, the night and day can still be differentiated in the 24 hours duration. This is further strengthened by Allah SWT’s statement:

“And eat and drink until the white thread of dawn becomes distinct to you from the black thread [of night].”

From both the above stated opinions, we are inclined towards the second opinion, for it is in line with maqasid syara’ and offers facilitation for those who have to fast for more than 19 hours. This is in accordance with the statement of Allah SWT:

“And has not placed upon you in the religion any difficulty.”

“The most important thing in maqasid syariat in the determination of the times for prayer and the time for fast is to make it so that it is not an impossibility for them to be performed. At the same time protecting and highlight the meaning of the syariat without depreciating it.” Refer al-‘Aql wa al-Fiqh Fi Fahm al-Hadith al-Nabawi (pg.125)